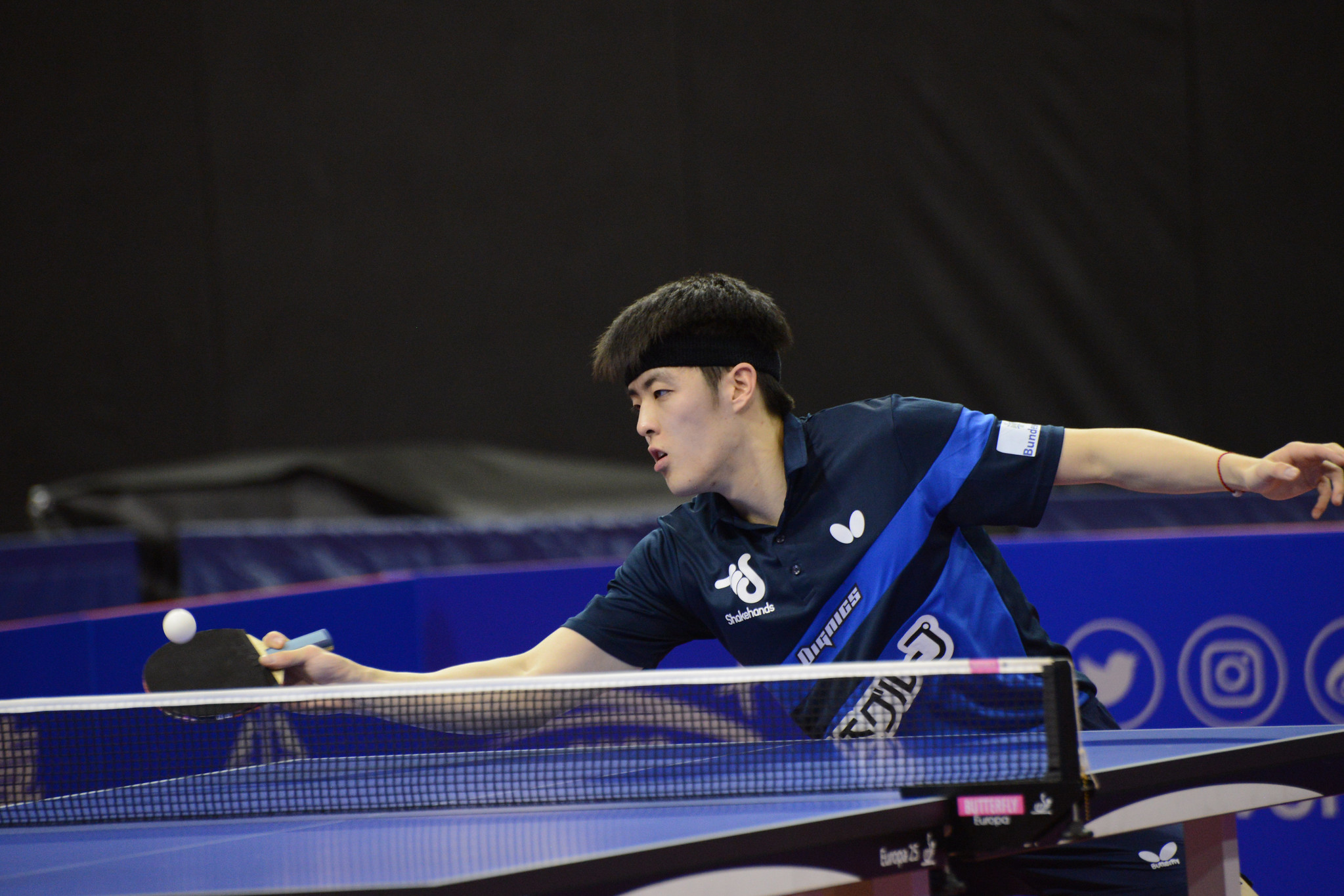 Play concluded this weekend at the 2020 ITTF Challenge Plus Portugal Open in Lisbon.  As a Challenge Series event, this tournament did not include the top echelon of ranked players, but it was a competitive group that included top seeds Omar Assar and Robert Gardos, as well as other recognizable names: Paul Drinkhall, Aleksander Karakasevic, Chien-An Chen, Emmanuel Lebesson, Tiago Apolonia, and Marcos Madrid.

In the top half of the draw, top seeded Omar Assar won his opening two rounds (both tight) before falling in the Round of 16 to Yaroslav Zhmudenko of Ukraine.  The other seeded player in the top of the draw was Wang Yang of Slovakia – he lost his opening match to Japan’s Shunsuke Togami, opening a lane for local player Joao Geraldo of Portugal to advance all the way to the Semifinal.  The bottom half of the draw included Chen Chien-An and Robert Gardos as the top seeds and both fell in their second match on the first day.  Eventually it was Anders Lind of Denmark and Qiu Dang of Germany who navigated through the upset-ridden draw to reach the Semifinal.  To put this in perspective, the final four players left were Joao Geraldo (seed No. 32) v. Pryshchepa (seed No. 41), and Qiu Dang (no. 20) v. Anders Lind (seed No. 24).

The Sunday morning Semifinals were both seven-game affairs.  Ukraine’s Pryshchepa overcame Geraldo in a match with several momentum shifts, including four blow-out games:  Pryshchepa over Geraldo 4-3 (-7, 10, 2, -5, 12, -6, 5).  In the other Semifinal, it was Germany’s Qiu who fought back from being down 3-1 to score the 4-3 victory:  Qiu over Lind 4-3 (-8, 5, -4, -13, 2, 6, 10).  Qiu Dang is a good story, a 23-year-old up-and-coming German player (of Chinese decent) who has been competing internationally for Germany since he was 16.  Qiu’s ranking has moved inside the Top 80 in the World.  The Butterfly player is the only German team member to use the penhold grip. Qiu is now the sixth ranked player in Germany, and the results in Portugal are just one more step.  Most team events only feature three players, but with injuries and age catching up to other players, Qiu Dang may be a part of the next young nucleus of great German players.

The Women’s Event was dominated by the Japanese contingent.  Both of the top seeds were Japanese (Ishikawa and Sato), so having an all-Japan final was not unexpected.  However, after second-seeded Sato lost to Germany’s Xiaona Shan in the Round of 16, this result seemed unlikely.  But Miyu Kato dominated her matches (4-0, 4-0, 4-0) to reach the Semis and join top-seeded Kasumi Ishikawa.  And in the bottom of the draw, Japan’s Saki Shibata overcame Shan to reach the Semis – where she was faced off against Hsien-Tzu Cheng of Chinese Taipei.  Shibata dispensed with Cheng 4-1 and Ishikawa won the other Semi 4-2.  The all-Japan final went to Ishikawa 4-0.

In the U-21 Men’s event, USA’s Nicholas Tio advanced to the Round of 16 with wins over Gabriel Perez and Adrien Rassenfosse, before falling to Chile’s Nicolas Burgos.  Even more impressive was USA’s Nikhil Kumar who logged four wins before falling to Japan’s Shunsuke Togami in the Semifinals.  The event ultimately went to Vladimir Sidorenko of Russia 3-2 over Togami.  Bronze for Kumar and TeamUSA.

Amy Wang won three matches before falling 1-3 to Daria Trigolos of Bulgaria in the Quarterfinals of the U-21 Women’s event.  Trigolos finished second, falling to Maki Shiomi 3-1 in the Final.

In the Open Singles Events, US players logged solid results in the preliminary rounds.  To qualify for the main draw, players in the preliminary rounds were required to win two single elimination rounds.  The US players were all qualifiers, with Nikhil Kumar and Kai Zhang advancing to the knock-out rounds, Mishel Levinski losing his opening match and Nicholas Tio falling just short with a 1-1 finish.  Puerto Rico’s Brian Afanador also advanced to the knock-out rounds, though the other two players they sent, Gabriel Perez and Daniel Gonzalez each lost their opening round.  Of the qualifiers from the US and Puerto Rico, none won their opening round.  Nikhil Kumar fell 403 to Majoros (HUN), and Kai Zhang fell to Alberto Mino of Ecuador.  Brian Afanador fell 4-1 to a player from Portugal.  Marcos Madrid of Mexico also lost his opening match to Ukraine’s Pryshchepa.  In regard to players from this Hemisphere, only Vitor Ishiy of Brazil and Alberto Mino of Ecuador won a knock-out round (and only Mino won two – before losing in the Round of 16).   On the Women’s side, USA’s Amy Wang advanced to the main draw and Puerto Rico’s Adriana Diaz and Melanie Diaz were each seeded into the main draw.  None of the three won their opening match.