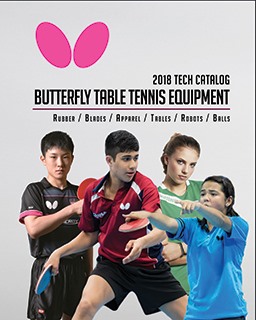 2016 ITTF North American Championships Teams Courtesy of ITTF & USA Table Tennis A clash of North American Nations will go down on Saturday September 10, 2016 as the USA and Canada go head to head on a single center table at ICC Table Tennis Center in Milpitas, CA. The winners will earn qualification for […]

Kenta Matsudaira the player to beat in Olomouc

Kenta Matsudaira the player to beat in Olomouc Courtesy of ITTF / by Simon Daish With the ITTF World Tour Czech Open set to get underway on August 31st, we take a look at which players could mount a challenge for the Men’s Singles title. Top Seed Favorite Kenta Matsudaira (Japan) heads the charge in […]

Videos about D.R Open II. and Butterfly Dear Everybody, 1. You can watch videos about D.R Open II. Tournament on our YouTube channel, please subscribe if you like it. HERE IS THE link: https://www.youtube.com/channel/UCZk9YIcNTUKFRsXw2UwXuUw 2. Our Facebook page and website: facebook.com/drtabletennis www.drtabletennis.com 3. New FB group about table tennis for players in the Southwestern Ontario […]

Zhang Jike Changing his Heart on Retirement Courtesy of ITTF / By Henry Chen Retirement is an unavoidable thing for any athlete. For the 28-year old Grand Slam champion Zhang Jike, this issue was raised after he successfully completed his tasks in the Rio Olympic Games. At first, he said that he is already prepared […]

Eugene Wang: ‘I have no regrets’ over Rio 2016 efforts Courtesy of ITTF Canada’s Eugene Wang says he has no regrets about how his Olympic journey unfolded at Rio 2016, and is already looking ahead to Tokyo 2020. by Simon Daish Wang (seeded 41st at Rio 2016) registered victory against Jorge Campos (Cuba) and Li […]