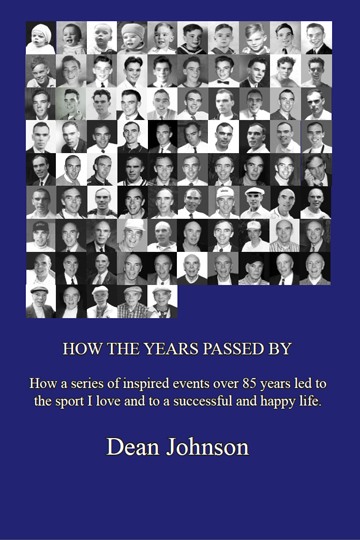 Dean Johnson’s Autobiography: How The Years Passed By

Dean Johnson’s Autobiography: How The Years Passed By

(by Tim Boggan)
Dean Johnson’s Autobiography: How The Years Passed By (How a series of inspired events over 85 years led to the sport I love and to a successful and happy life.)

Proving, as the title of his new book says, that the years have indeed passed by, Dean Johnson, now 85 (with 85 photos of himself uniquely on the front cover of his nearly 300-page autobiography) played table tennis, and played it well, way back when. In 1961, at the New Jersey Closed he defeated many-time champion Bill Cross in the semi’s, then forced John Kilpatrick, legendary for his athletic prowess, into the fifth. And Helga, his wife-to-be, who’d emigrated from Germany, where in the 1950’s Dean had spent 2 and ½ years as an Army Stars and Stripes photographer learning how best to take the more than 300 photos that fill this book, was no slouch either. Once a Junior Champion in Hamburg, Helga soon became one of Canada’s best women players. Then after Dean wooed and won her, she became, on coming to her new home in New Jersey, the 1965 State Women’s Champion.

While Dean played in tournaments, we see that he became friends with one of the U.S.’s greatest players—Sol Schiff. For 10 years, from 1962-1972, he and Sol played exhibitions in recreation centers, churches, synagogues, and at sporting goods shows. Dean was also good friends with Marty Reisman, another long-time famous (and notably the most flamboyant) American player. Together in an April, 1975 Exhibition, they raised $2,500 to benefit the children of a family in Kinnelon, New Jersey whose home was destroyed, the parents, a grandmother, and a brother killed, by the ravaging fire. When each of these great players died, as well as others (Sally Green Prouty and Dick Miles come immediately to mind) no aficionado could forget that Dean paid public homage to them.

And then, quickly it seems, there comes a very significant time lapse in Dean’s table tennis life. Until…

Thirteen years ago, Dean and Helga left their New Jersey life and he returned to the sport that was his first love—he became a Founding member of the Newport News Table Tennis Club, and of course picked up where he’d left off—playing exhibitions in local schools and clubs, and promoting the sport among recreation players and in Senior Centers.

By 2007, Dean had again become immersed in table tennis. For the next 10 years he would continue to show the versatility of his talents and his still very strong commitment to involve himself both inside, favoring what he’d been weaned on, hardbat play (U.S. #2 in Over 70 play) and outside the courts.

He became interested in Hall of Fame work—began by helping me (still does) by providing the accompanying graphics so necessary to my yearly inductee presentations. Then, when the opportunity arose, he became a welcome member of the HOF Board of Directors, and as such took the opportunity in 2011 to negotiate with the Triangle Table Tennis Club in Morrisville, North Carolina to form there, with the particular help of club owner Ann Campbell and club manager Mike Babuin, what had always been so wanted but so elusive—an actual site for a U.S. Table Tennis Hall of Fame.

How productive 2011 was for Dean. For his home-town Virginia Beach, Virginia U.S. National’s he was named the Chair of the local Organizing Committee, and as five-time U.S. Champion Sean O’Neill said, “The 2012 tournament would not have been possible without the vision and support of tournament host Dean Johnson.” The Virginia Beach Convention and Visitors Bureau obviously agreed—they gave Dean an “Ambassador Extraordinaire” Award.

In Virginia Beach, Dean also continued to be involved in Ping Pong Charity work. A Foundation set up for that purpose by Ken Lees has him as a Board member. And a great success it was. In September, 2015 alone, the 7th annual Ping Pong for Charity/Celebrity SLAMfest event raised over $75,000 for four charity partners—Alzheimer’s Association, Vanguard Landing, Parkinson’s, and People in Need—and to date has raised over $500,000! Two months later, just before Dean’s own induction into our Hall of Fame, he joined Dr. Scott Sauter, to further a retired community program promoting the therapeutic value of Ping Pong for Life.

Sauter is both Scott’s and my mother’s maiden name, and Dean and his wife were married on the same day of the year, July 25, as my wife Sally and me. Also, Dean got the idea of he and I co-authoring the six-volume set of American Table Tennis Players of the Classic Age, 1931-1966. Perhaps he intuitively feels such coincidences were meant to connect us as friends, for he certainly attributes much of his success to divinely inspired events. Take, for example, his chance find in the 1950’s of Hall of Famer Coleman Clark’s book on table tennis (wow, what that led to). Or how his hobby of pencil sketching and pen and ink drawings blossomed into a career in graphic arts and the Communications/Advertising/Design agency he and Helga ran productively for decades.

Of late, Dean, as a member of the ITTF Veterans Committee, was among those Americans who went to Suzhou, China to successfully secure the sure-to-be massively attended World Veterans Championships to be held in 2018 in Las Vegas. As you read this book, you can judge for yourself whether again and again Dean was favored with inspirational help. But one thing stands out: he was aggressive, would take, as he said, “a leap of faith,” and then with his family would work relentlessly to make progress happen.

Clearly he was determined to advance himself, his wife, and kids, both by earning a respectable living and by advancing the family’s status in the sport they all participated in—tennis. Lots of challenges there…while the kids, Eric, Karen, and Kristina. along with mom and dad, were becoming tournament title-holders. “Without Helga,” said Dean, our ad agency could not have functioned. She exhibited persistence and skill as bookkeeper, media director, bill collector, and gained computer competence—all in addition to raising three children, running a household, cooking and gardening—and making time for everyone’s tennis, thus allowing me the freedom to concentrate on servicing customers. Hey, there’s an inspiring Johnson-Boggan connection—no surprise I’m talking about this book.

Dean’s How the Years Passed By is available online through xulonpress.com/bookstore, amazon.com, and barnesandnoble.com.

(by Steve Hopkins, photo USATT) The 2022 ITTF World Team Championships Finals is underway in Chengdu, and both… Read More