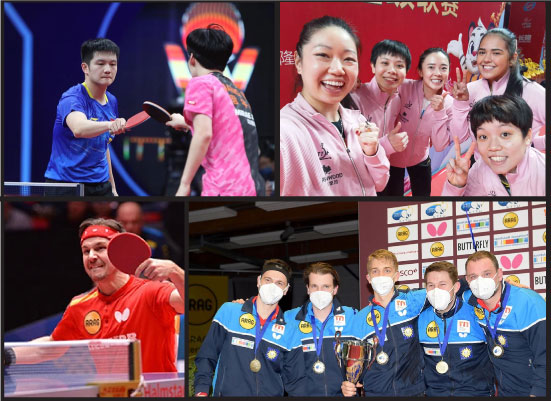 THE YEAR IN REVIEW: All the Pong News that’s Fit to rePrint

In January, we reported that Fan Zhendong won the Marvellous 2020.  In February Xu Xin topped the German Open, Timo Boll won the Euro Top 16, and Harimoto won the Hungarian Open. In March, the US Olympic Trials resulted in Zhou and Kumar joining Jha on the Men’s Team, and Liu and Wang joining Zhang on the Women’s Team (these will now be our Olympic teams for 2021).

March also saw Fan Zhendong win in the Qatar Open  – with many of that event’s headlines stolen by Liam Pitchford who had a series of upsets on his way to the Finals.

After Qatar, most of the headlines were about COVID-19:  COVID-19 Affecting US Sports, Quarantine + Ping Pong, Pong for One: Table Tennis Home Workouts, Pong Flicks Chill Repeat, Table Tennis is Art, and any number of other articles about workouts, and reviews and entertainment.  And as we began to reopen in the US, Butterfly brought you articles about how different clubs were addressing cleaning protocols and occupancy rules – and we offered an “OPEN DOORS” series highlighting WE ARE BUTTERFLY Clubs as they reopened.  In June we covered events in Germany as they began to offer competitive events in a bubble that they named the Dusseldorf Masters. In July tournaments started again in the US.  USATT ran its own controlled events called Thursday Night Live that featured top American players in challenge matches with T2 sponsoring the weekly events.

Most recently, the WTT ran its first event – a Macau challenge event with Ma Long topping the men, and Sun Yingsha topping the women.  And as America’s top male athlete, Kanak Jha, is competing in the German Bundesliga as a part of Leibherr Ochsenhausen (video highlights), America’s top woman, Lily Zhang, is competing in the Chinese Superleague as a part of the ITTF World Professionals (see article).

Butterfly announced a new partnership with Dimitrij Ovtcharov on January 1 of 2020.  There were limited events, but Butterfly players had an impact through the year.  Timo Boll won the Euro 16, Tomokazu Harimoto won the Hungarian Open and finished No. 4 in the Rankings, Lin Gaoyuan finished the year at 5th in the World Rankings, and Lin Yun-Ju established himself firmly as a Top 10 player in the World.  None of these references include players who split their brands and use Butterfly equipment in combination with other brands – Butterfly rubber and blades are consistently a part of the best matches at the best events, helping to entertain the table tennis community.