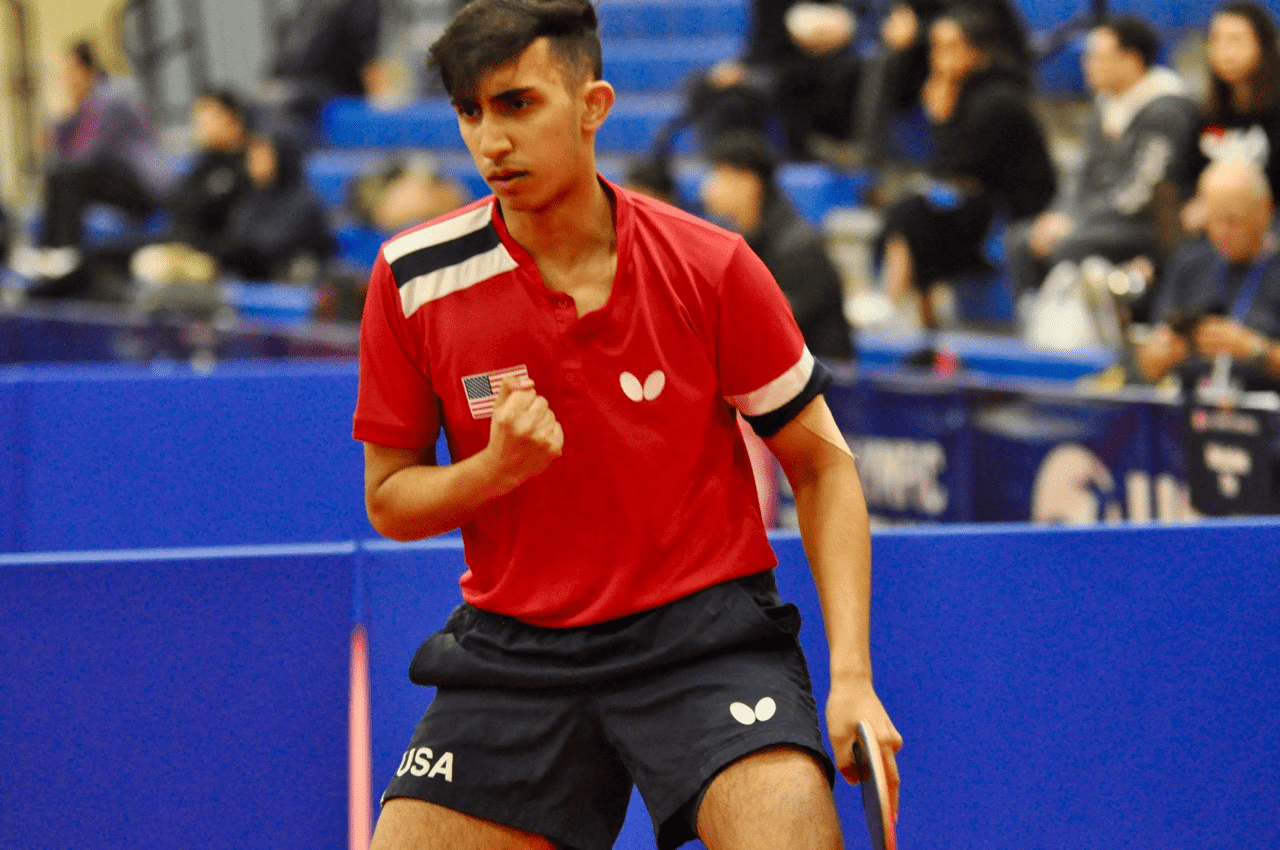 March 1, 2020
US Olympic Trials Recap: Zhou & Kumar join Jha / Liu and Wang join Zhang
(by Steve Hopkins; photo by Bruce Liu)
The US Olympic Trials were held this week in California at Santa Monica College.  The events were a series of preliminary and qualifying rounds leading to a two-part final round to name two men and two women to the US Olympic Table Tennis Team for the Tokyo 2020 Olympics.
With Kanak Jha having already qualified by World Ranking, the prize of the Men’s event was reserved for the top two finishers – who would join Kanak Jha on Team USA. Sixteen qualifying players were placed into groups by seed and they were joined by 8 Preliminary Round qualifiers.  The result was 8 groups of three players each with the top 8 players advancing.  The next round was called the Final RR First Stage where two groups of 8 players each (8 Qualifiers and 8 Seeded Players) competed and the top four in both round robins moved forward to play in the Top Division of the Final RR Second Stage.  It was this second stage of the final round robin that determined the final positions, with the top two moving forward to the US Team.
In the Preliminary Round, the eight qualifiers mostly progressed as expected based upon their rating.  Aditiya Godwani, Eliel Sosis, Joseph Cochran, Stephen Chu, Paul David, and Chi-Sun Chui each were the top seed in their section, and each won their matches to move forward.  David Zeng and Jeff Ruiz each pulled off small upsets to advance.  Dan Seemiller, whose Olympic quest has been covered in several other articles, found himself down 0-3 to Chi-Sun Chui before winning three games in a row to tie the match, and then falling 15-13 in a heartbreaking Game 7 loss.  It was a fitting battle for a player known for his grit – but he fell just short and did not advance.
Of the Preliminary Round qualifiers, only Aditya Godhwani managed to win his Qualifying Round group and advance to the Final RR.  Six others that advanced were the top seed in their group: Michael Landers, Ted Li, Adar Alguetti, Dan Liu, Kunal Chodri, and Mishel Levinski.  The other quasi-upset was Hao Donglong – he was technically the second seed in his group but the rating of Player 1 (Michael Tran) and Player 2 were the same.  The other very tight group was Group 5 where top seed Ted Li advanced, but it took a 4-3 win over former Olympian Tim Wang.
In the Men’s Final RR First Stage, the goal was to finish in the Top 4 of each of the 8-person groups.  In Group 1, the top three seeds each advanced (Kai Zhang, Xin Zhou, Jishan Liang) and fifth seeded Dan Liu finished second to advance as well.  In Group 2, the top four seeds advanced (Nikhil Kuman, Nicholas Tio, Sharon Alguetti, and Yijun Feng).  The seedings in the Second Stage were based upon the performances in the First Stage, and the seeding provided correct through the first three spots.  Xin Zhou and Nikhil Kumar were seeded 1 and 2 and they finished first and second.  The third spot, important because he could move up if another player is injured, is Yijun Feng.  Congratulations to Xin Zhou and Nikhil Kumar who will join Kanak Jha on Team USA.
Lily Zhang has already qualified based upon her World Ranking, so the Women’s qualifier is designed to name two teammates for Lily.  In the Women’s event, the top seeds were Jennifer Wu and Amy Wang.  The only qualifier was Kylie Lam. In the Women’s Final RR First Stage, the goal was to finish in the top 4 of the 8-person round robins.  In both groups, the top four seeds advanced – though it was Huijing Wang who upset the order and won Group 1, and Juan Liu did the same in Group 2.  In the Women’s Final RR Second Stage Juan Liu continued her great play and went undefeated.  Huijing Wang fell twice in the second stage, but managed to finish in second place.  Crystal Wang finished third with a 4-3 score.  Congratulations to Juan Liu and Huijing Wang who will join Lily Zhang on Team USA.