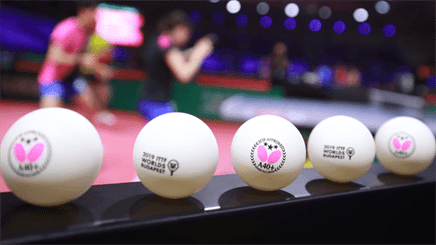 USA’s mixed doubles pair of Nikhil Kumar and Lily Zhang drew Fan Zhendong and Ding Ning as their opening match opponents.  That is, when most teams are just hoping to get used to the playing conditions and gain some momentum, Nikhil and Lily had to contend with the No. 1 player in the Men’s World Rankings paired with the No. 1 player in the Women’s World Rankings.  The high point for the Americans was an 8-8 score in game two.  Unfortunately, that was as close as they would get – losing 3-0 (11-5, 11-8, and 11-3).

Early key results from the group preliminary rounds includes USA’s Victor Liu who was seeded third, but upset both of the other players in the group to finish first and advance.  His wins were over Nigeria’s Segun Toriola 4-1 and over Egypt’s Kanate Ali 4-0.  USA’s Nikhil Kumar is also 1-0 in group play, and will face Cuba’s Andy Pereira on Monday.   Puerto Rico’s Brian Afanador and Daniel Gonzalez are each 1-0 in their respective round robins with the key matches scheduled tomorrow.

Early results in the Women’s group preliminaries includes USA’s Amy Wang at 1-0 and waiting for her deciding match on Monday.  Canada’s Alicia Cote is also 1-0, with her next match scheduled for tomorrow.

With the preliminary rounds underway, their opponents are as yet unknown, but we do know where the seeded players have been placed in the singles brackets.  World No. 1 Fan Zhendong is in the top position, with Liang Jingkun, Dimitrij Ovtcharov, Ma Long, Hugo Calderano and Koki Niwa as the other top players in that half of the draw.  USA’s Kanak Jha is seeded into the main draw and is slotted to play Ma Long in the Round of 64 on Tuesday if both win their first match.

In the bottom half of the draw, Xu Xin is the highest of the seeds with Tomokazu Harimoto, Wong Chun Ting, Timo Boll, Sangsu Lee, and Mattias Falck.  Early matches begin on Tuesday.