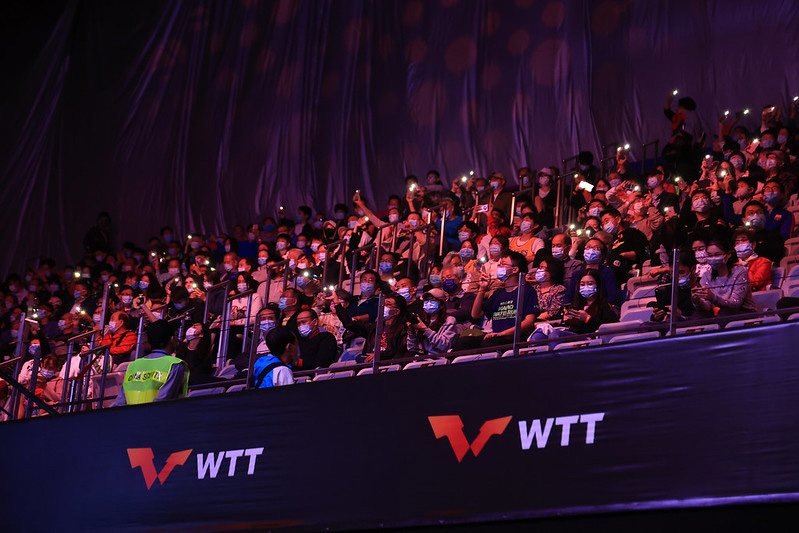 WTT Macau Recap: Raising the $ Bar for the Sport

World Table Tennis is a new ITTF entity designed to create table tennis entertainment events – and their inaugural event concluded over the weekend in Macau.  The official name of the event was WTT MACAO 2020 Presented by Galaxy Entertainment Group.  The event is at the TAP SEAC Multisport Pavilion in Macau, the autonomous region of China located across the bay from Hong Kong.  *The MACAO spelling is the original and remains preferred by most of Europe, though MACAU appears to be the more modern spelling (both are considered correct).

WTT invited 16 men and women.  The headliners on the Men’s side include Xu Xin, Ma Long, Lin Gaoyuan, and Hugo Calderano.  The headliners on the Women’s side include Chen Meng, Sun Yingsha, Wang Manyu, and Ding Ning.  Key international players from outside Asia include Mattias Falck, Liam Pitchford, and Robert Gardos and some of the international women players include USA’s Lily Zhang, Adriana Diaz, Petrissa Solja, and Bernadette Szocs.

The bottom seven players played in a knockout format with the winners proceeding – this was called “BATTLE ONE”.  The Round One winners played seeds 5-8 in Round Two (Battle Two).  And the four winners of Round Two then played against the Top 4 seeds (whose position was determined by shortened seeding matches – a round robin played to best of 3 games with the winner only  needing 8 points to win each game).

Fang Bo logged an early upset (overtaking Lin Yun-Ju 3-2), and there were two Quarterfinal upsets (Mattias Falck over top seed Xu Xin, and Wang Chuqin over Hugo Calderano).  In the end, it was Ma Long finishing first over Wang Chuqin.

On the Women’s side, USA’s Lily Zhang advanced early, but the top seeds won all four of the second round matches (the “Battle 2” matches).  Cheng I-Ching, Feng Tianwei, Wang Yidi, and Chen Xingtong advanced.  In the Quarterfinals, only one player outside of the Top 4 managed an upset – that was Chen Xingtong who upset Ding Ning 3-2.  Xington fell to Sun Yingsha in the Final.