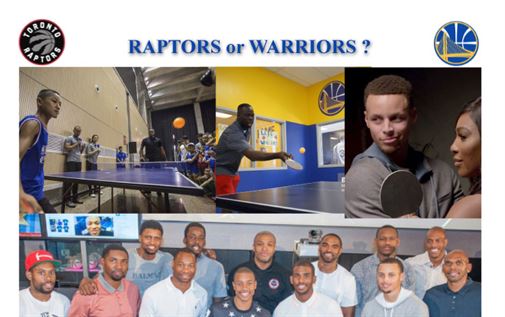 It’s no surprise to any of the table tennis audience for this post that our sport doesn’t make headlines in the US.  Because of this, I like to find table tennis angles to most of the big sporting events.  At this time, I’m announcing my TT-focused pick for the NBA’s 2019 Championship.

This is a regular series of mine, and I’ve yet to fall below 50% across all of my selections, so this method of selecting winners is as good as most of the Las Vegas sportsbooks: See my Clemson University over Auburn University for the NCAA football champion pick as an example of a “winner”, and don’t look too closely at my pick of  the Rams to beat the Patriots in the Superbowl.

Fans have some strange ways of picking winners in important games across all sports.  Some cheer with their heart, having followed a team and developed an attachment over the course of a season.  Others pull for underdogs or favorites and rely upon the experts and the betting lines and the resulting buzz.  2018 world cup soccer fans used an octopus from Germany, a camel in Dubai, and a pig in England to make choices for them.   Many rely on commentators or Las Vegas to pick the winners for us (currently the Vegas odds are solidly in the Bruin’s favor).  I’m not suggesting that this pick has more science behind it than the experts in Las Vegas or the cuteness factor associated with selections by an animal.

Just for fun, this pick is based upon factors closer to my heart – the extent to which the teams and the players enjoy or support table tennis.

In Toronto, the best player on the team, Kawhi Leonard, plays.  There are photos of him in Beijing entertaining a group of students (see the photo above) and a few other references in articles.  Raptors super-fan Drake also plays  and there are articles and videos of him playing for fun and challenging celebrities and NBA players.

But the Golden State Warriors clearly have the table tennis advantage.  They have a table in their player’s lounge and there are numerous videos and article references to team members enjoying and participating in our sport.  Warrior All-Stars Green and Curry both have recent videos, Steph Curry participated in two of Chris Paul’s ping pong fundraisers, and  there are two commercials from Chase Bank with Steph Curry taking on Serena Williams in a ping pong match.

Admittedly, I am writing this as GAME 3 is underway, and the Raptors are up at the half (the teams are tied 1-1 in the series).  The Warriors are missing Klay Thompson and Kevin Durant and seem a little underhanded.  But this pick isn’t based upon a traditional balance of NBA abilities, this is a table tennis pick – and none of those three players are important factors that affect my table tennis logic.  It is clear that the Warriors have spent more time visibly enjoying and supporting the sport of table tennis and that’s good enough for me.

I am picking the Golden State Warriors as NBA champions.