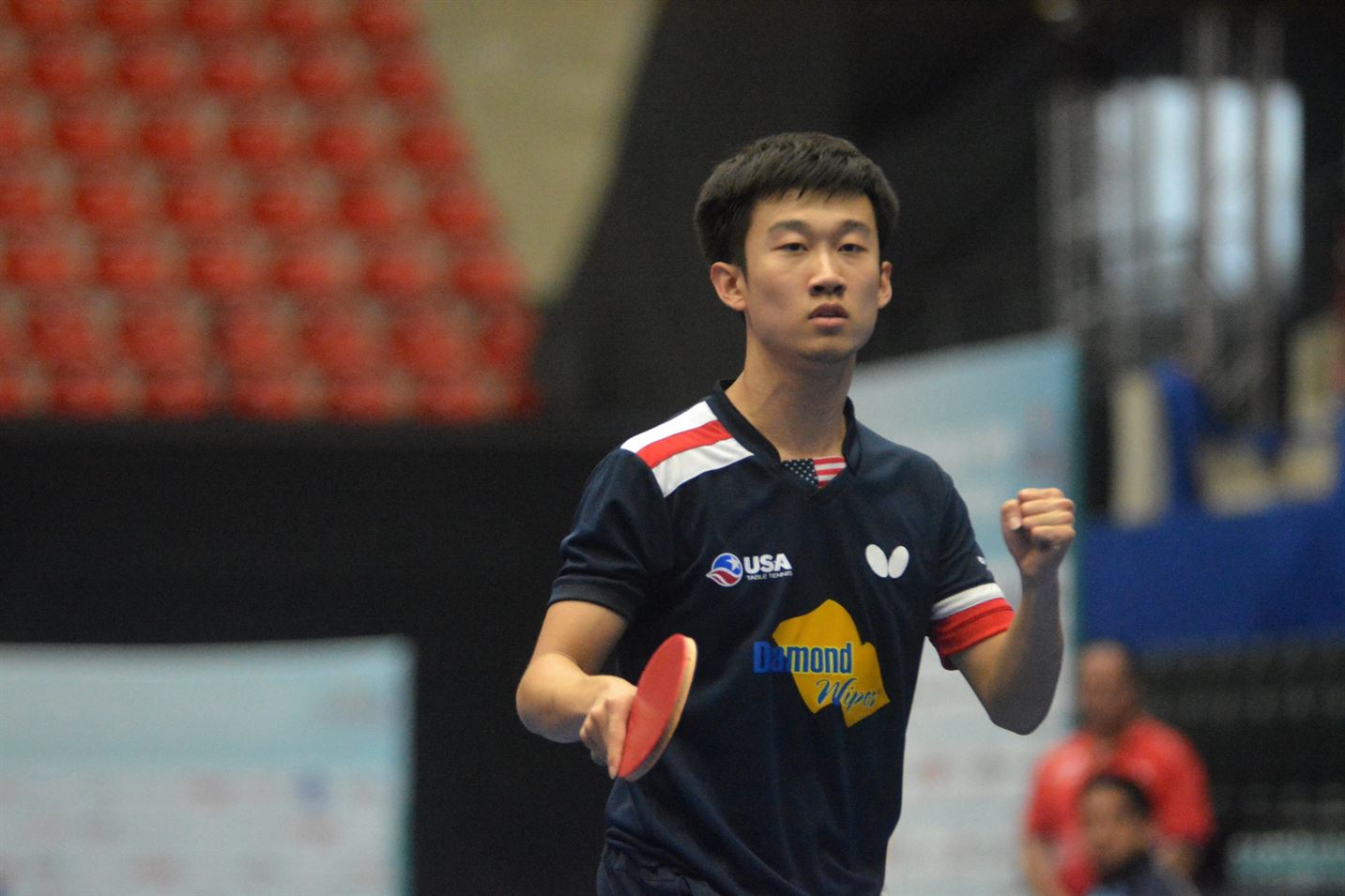 The 2019 ITTF Challenge Plus Paraguay Open was played this week in Asuncion Paraguay.  The Challenge Series is its own tour series, generally without the top tier of ranked players.  The top seeds in the Men’s event were Koki Niwa (World No. 10), Gustavo Tsuboi (World No. 32), Robert Gardos (World No. 55), and Masataka Morizono (World No. 56).

Masataka Morizono won the final on Saturday over Robert Gardos in a dominating fashion – winning 4-0.  This match-up between the fourth seed and the third seed was not out of the norm for an ITTF event.  The real stories are found in the earlier rounds.

USA’s Kai Zhang provided one of the biggest story lines.  Kai did not initially qualify to play in the Main Draw, so he competed in a Preliminary round in hopes of qualifying.  Kai lost a heartbreaker to Puerto Rico’s Daniel Gonzales – a match were he held a 2-0 game lead and a 3-2 game lead before falling victim to Gonzales’ comeback.  The five winners of the preliminary matches advanced to the Knock Out Round and because there were six open positions, one additional spot was awarded by lottery.  Kai Zhang’s name was pulled from the lottery – and the reward was a spot in the main draw, facing off against top seed Koki Niwa.

In the opening game, Niwa seemingly struggled to gain feeling and he missed easy balls and allowed some balls to lift up.  Kai, in contrast, found his energy immediately and played smart and aggressive points.  Kai pulled ahead toward the middle of the first game, and then cruised to take the win.  Towards the end of the first game, Niwa tried some more aggressive service returns and took a few big swings as he conceded the loss but tried very hard to get himself motivated and ready for the next game.  The second game was even more lopsided.  Kai logged the first seven points before Niwa scored.  Niwa then moved away from the table to play some more controlled rallies and to extend the points, and found that he could win most of these rallies.  Niwa mounted a comeback and narrowed the score to 8-9.  Kai then won two points in a row, extending his lead to 2-0.

Niwa played the start of the third game much like the end of the fourth.  He was more careful with placement and seemed to be trying to extend the length of the rallies.  Kai changed his tactics as well, becoming even more aggressive and using his feet to position himself for big forehands.  Kai pulled ahead 8-4, and then held on for an 11-6 victory.  The match almost ended in the fourth game, as the players were tied 8-8 when Niwa misplayed a serve.  With the 9-8 lead, Kai played an aggressive point and pulled a loop long.  At 9-9, Kai played two points with blistering backhand attacks – he missed one, and hit a clean winner for the second leaving the score 10-10.  But Kai then missed a crosscourt forehand badly and missed a backhand winner by inches giving Niwa the win in game 4.

Niwa found his stride in the fifth game – playing controlled balls wide to Kai’s forehand and then changing directly with authority and pressing the pace.  Niwa won the game handily 11-2, but was still down 3-2 in games.  In Game 6, Niwa changed tactics again – playing his controlled balls to Kai’s backhand.  The score was tied 4-4, and 5-5, and 6-6.  It was here that Kai pulled ahead.  Down 5-6, Kai surprised Niwa with a short inside-out forehand that fell off the table wide of the left-handed Niwa’s forehand  – the resulting lob created the attack that tied the score at 6-6.  Niwa missed a slow backhand loop in the next point.  Up 7-6, Kai went back to the careful inside-out forehand wide to Niwa’s forehand again, and Niwa moved far to the left to attach the shot leaving the table wide-open for Kai’s block return.  Kai was then up 8-6 and Niwa played the next ball extra carefully to Kai’s backhand – only to see him step around and strike a big forehand winner into Niwa’s body. Up 9-6, Kai swung wildly with his backhand and missed.  Serving up 9-7, Kai went back to the inside-out forehand wide to Niwa’s forehand – only this time Niwa was ready and overpowered Kai with the crosscourt return.  The two players then exchanged backhands – with Niwa pulling his second loop long.  Up 10-8, Kai played an aggressive forehand series crosscourt and when Niwa’s forehand fell into the net, the upset was complete.  Kai Zhang (World No. 502) over Koki Niwa (World No. 10) in the Round of 32 by a score of 4-2 (4, 8, 6, -10, -2, 8).  Kai Zhang’s tournament ended a day later with a 4-1 loss to Horacio Cifuentes of Argentina.  Thus, Zhang ended the tournament with one win and two losses – but oh what a win it was.

The tournament’s second seed, Gustavo Tsuboi didn’t fare much better than Niwa.  Tsuboi fell to his Team Brazil teammate Vitor Ishiy 4-0 in the Round of 16.  Ishiy went on to defeat Puerto Rico’s Brian Afanador in the next round, before losing in the Semifinal to Robert Gardos of Austria.  In the top half of the draw, it was fourth seeded Morizono who swept through the competition on his way to the Semifinal.  There, he defeated Horacio Cifuentes 4-0.  In the final, it was Morizono over Gardos 4-0.

Puerto Rico’s Adriana Diaz was the top seed in the Women’s event.  She logged two wins (including one over her sister) on the way to the Semifinals.  The other three top seeds also advanced – with Japan’s Hina Hayata advancing to face Diaz and Japan’s Honoka Hashimoto and Slovakia’s Barbora Balazova facing off in the other half of the draw.  It was Hayata over Diaz 4-1 and Hashimoto over Balazova 4-0 setting up an all-Japan Final.  In that Final, it was Hina Hayata dropping the first game but then dominating thereafter.  Hayata over Hashimoto 4-2.