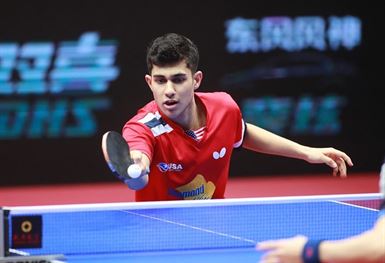 The Knock-Out Rounds are underway at the Chengdu Airlines 2019 ITTF Men’s World Cup.  The top 8 qualifiers advanced to face the top 8 seeds.  USA’s Kanak Jha finished second in his group to advance.  Other qualifiers included Dimitrij Ovtcharov, Daniel Habesohn, Sangsu Lee, Quadri Aruna, Kristian Karlsson, Simon Gauzy and Sathiyan Gnanasekaran.  Only one of the qualifiers advanced from the Round of 16 and that was Dimitrij Ovtcharov, the former World No. 1 who is recovering from injury.

Kanak Jha’s opponent in the Round of 16 was World No. 6 Hugo Calderano.  These two players have faced each other many times, and in most of the recent matches it was Hugo Calderano overpowering the American.  Today, however, Kanak Jha jumped ahead early with a win in the first game.  The tactics for Kanak involved some more aggressive efforts to end points – with stronger flips early and some mashes and very strong loops late in points.  Basically,  he traded higher risk shots in exchange for more explosiveness.  Like many times in the recent past, Hugo Calderano found his stride quickly in the second game and he built an early lead.  In fact, with a four-point lead, Kanak had pressed the pace and pushed Hugo away from the table but after several lobs and a quick exchange, even that point had gone to the Brazilian.  Kanak had fallen behind 8-2 at one point but then fought his way back with careful points – being sure not to make mistakes.

At 9-9, Kanak made a very aggressive forehand cross-court flip that sent Hugo reaching wide to his forehand.  Kanak pressed the pace with his backhand and hit a strong cross-court ball that left Hugo stretching and hitting a heavy two-handed backhand.  Kanak then stepped down the left side of the table to put the ball away with his forehand.  The final point was a miss by Hugo into the net and the come-back was complete. Jha wins the game 11-9 to go up 2-0 in the match.

Game Three was dominated again early by Hugo – only this time he also dominated the second half, closing out the game at 11-6.  Game Four was a much better start for Kanak, trading points to 3-3 and then going up 5-3 with two strong points.  But Hugo won a long point with some tricky chops, and then Kanak missed a serve (5-5).  Jha played the next two points to Hugo’s center, and Hugo lost one point with a loop that tipped the net and then lost the next point pulling a loop off the end of the table.  Hugo then won a blistering loop on loop exchange and followed that up by tying the score again with a tricky chop that Jha pushed wide.  Jha missed a short ball to go down a point for the first time in the game and called time out.  Kanak’s aggressive backhand down the middle tied the game, and as Hugo again moved away from the table with a tricky set of chops, Kanak played a careful loop short to win the point.  Kanak won the next exchange to take a 10-8 lead.  Hugo ended a long rally with a cross-court forehand winner, but then missed a smash in the final point.  Jha wins the game 11-9 to go up 3-1.

Game Five started with two dominant points by Hugo – the second was an over-the-table smash into Kanak’s chest.  But the next four points all went to Kanak – two missed by Hugo, one solid exchange of loops, and one dominating attack ending in a blistering smash at a heavy angle to Hugo’s backhand.  The two exchanged points, with Jha being very careful again playing short balls and countering primarily back to the center of the table.  Two short misses by an impatient Hugo left the score 7-4 and this time it was Hugo calling time out to regroup.  Kanak with the advantage was back at the table first, dancing and running in place to get ready.  The first point after the timeout was aggressive by both players, but ended with a Kanak Jha missed backhand wide.  Hugo won the next two points by pressing pace with Jha missing his aggressive shots.  And Hugo took an 9-7 lead with two dominating loop shots – both pulled long by Kanak.  Hugo scored his 10th points by countering a Kanak cross-court forehand with a forehand smash – that appeared to be heading long but went into Kanak’s body while he was still leaning over the table.  The next point went to Hugo sealing the 11-7 win and bringing the match score to 3-2.

Hugo started Game Six pressing the pace again, winning or losing the early points with long free swings.  Kanak choose to play more careful early, with the higher percentage shots paying off to give him an early 4-2 advantage.  A missed forehand loop by Kanak was followed by a point that was perhaps too careful – with Kanak hitting consistent shots down the center line until Hugo stepped around and put one away with a big forehand.  Kanak missed a forehand loop and found himself down 4-6, and then 4-7 after another big attacking forehand by Hugo.  After exchanging points, and a Kanak missed serve, Hugo put the game away with two big forehand loops cross-court that seemed to overpower Kanak.  11-5 to Calderano – and on to the seventh game.

The seventh and deciding game began with an aggressive Kanak backhand flip and a loud Cho from the American.  A miss by Hugo and a missed smash by Kanak was followed up with a tricky hard serve and backhand exchange.  Hugo then hit two amazing shots to tie the score – the first a cross-court forehand wide of Kanak, and the second to almost the same place but an inside-out backhand down the line for the second clear winner in two points.  Jha won a long point smashing against Hugo’s lobs and then Hugo again hit two blistering balls in consecutive points to take a 5-4 lead.    A Kanak ball fell just short as the two exchanged backhands, and then Kanak pulled a forehand long to end the next rally (7-4 advantage to Calderano).  Jha had a serve and attack to pull back within 2, but Hugo had the help of the net in the next point to go up 8-4.  Hugo and Kanak traded a series of great points, but Hugo managed to maintain his lead – winning the final game 11-8.

Kanak Jha was seeded 16th entering the tournament.  Many will look at this result as finishing where he is supposed to finish – that is, the 16th seed reached the Round of 16.  But there’s more to be said here.  Kanak’s opponent was the World’s No. 6 Ranked player and this was a match that could have gone either way.  And this particular player is very familiar with Kanak – as they have faced each other in Pan Am and regional events many times in recent years.  The result today shows steady progress.  Solid tactics and execution against one of the world’s elite players – and a result that could have easily changed with one or two key balls bouncing a little differently.

Elsewhere in the tournament, it is now Fan Zhendong versus Timo Boll, Lin Yun-Ju versus Hugo Calderano, Tomokazu Harimoto versus Koki Niwa, and Dimitrij Ovtcharov versus Ma Long.  The Quarterfinals will be played Saturday with the Finals scheduled for Sunday.

Check in at ButterflyOnline.com for table tennis news and scores.

(by Steve Hopkins) USA Table Tennis has lost a legend.  George Braithwaite excelled in Cricket and Track and… Read More

Ask The Experts: Shahin Akhlaghpasand, No. 361

(by Steve Hopkins, photo by ITTFWorld) NASA coined the term “T-Minus” for space launches with the “T” indicating… Read More

(by Steve Hopkins) Timo Boll posted this video blog this morning.  It follows his trip to Dusseldorf for… Read More

(By Larry Hodges) Many players enjoy playing from away from the table, and some (especially defensive players) base… Read More