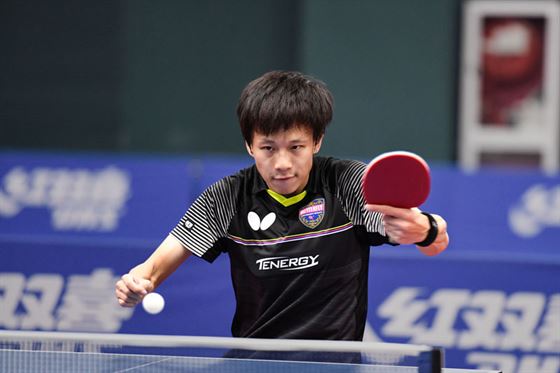 Budapest was host of the Seamaster 2019 ITTF World Tour, Hungarian Open. The top four seeds in the men’s event were Fan Zhendong, Xu Xin, Lin Gaoyuan, and Hugo Calderano.  The women’s event also included a strong contingent of Chinese players with all of the top four tournament seeds from that country: Zhu Yuling, Chen Meng, Wang Manyu, and Liu Shiwen.
In Men’s Singles, the top four seeds all advanced to the quarterfinals.  Fan Zhendong lost the first game to a Kazak player named Kirill Gerassimenko, but was able to outlast him for a 4-2 win.  Fan then overcame Chuang Chih-Yan of Taipei (4-2) to reach the quarters, and then defeated Russia’s top player, Alexander Shibaev (4-1) to reach the semis.  Xu Xing had tight 4-3 wins over Germany’s Benedikt Duda and China’s Liang Jingkun to reach the quarterfinals.  He then logged a dominating 4-0 win over Korea’s Johghoon Lim to reach the semis.   Third seed, Lin Gaoyuan had tight matches against other Chinese players in his first two matches, defeating Zhao Zihao 4-3 and then defeating Fang Bo 4-2.  Gaoyaun defeated Vladimir Samsonov 4-2 to become the third top seed to reach the final four.
The upset of the event was Hugo Calderano of Brazil who entered as the fourth seed, but who lost in the quarters to China’s Wang Chuqin.  Last year, Wang Chuqin made early headlines as he climbed from No. 70 to No. 9 in the 18 Boy’s Word Rankings, winning Gold at the Youth Olympic Games.  This year, he is trying his luck on the Men’s tour and after defeating World No. 6 (Calderano), he next test will be World No. 1 Fan Zhendong on Sunday in the Semifinals.
After a pretty straight forward quarterfinals round, the remaining matches were all unexpected.  World No. 1 Fan Zhendong lost to World No. 83 Wang Chuqin.  After Fan’s win in the first game, the match was slanted in Chuqin’s favor.  The key was that all three games decided by just 2 points went to Chuqin.  Chuqin over Fan 4-3 (-7, 7, 11, -5, 10, -3, 9).
The other semifinal was between World No. 2 Xu Xin and World No. 4 Lin Gaoyuan.  Gaoyuan won the first game 14-12, and Xu Xin never recovered.  The games were all close, but Butterfly player Lin Gaoyuan dominated the result and posted a 4-0 win.
Gaoyuan’s final followed the same script as his semifinal.  He won the first game over Wang Chuqin 13-11 and never looked back.  Gaoyuan collects the first tour title of 2019 in convincing manner and looks certain to move up to third in the February rankings when they are released.  Gaoyuan over Chuqin 4-0 (11, 10, 8, 9). Women’s Singles has been consistently less eventful than the men’s events at the tour stops.  The Hungarian Open was no exception as the top four seeds all advanced into the semifinals exactly as expected.  Canada’s Zhang Mo was the only player from North America to make the knock-out rounds – she fell 4-1 to Sun Mingyang of China in the round of 32.  Bernadette Szocs of Romania and Yu Fu of Portugal joined six Chinese players in the final eight.  However, with the exceptional play of the top seeds – it was an all-China final four on Sunday.
The top two seeds in the tournament, Zhu Yuling (World No.2) and Chen Meng (World No.4) each advanced to the final.  Zhu Yuling was pressed to the seventh game with Liu Shiwen (World No.5), but won the deciding game 12-10 to advance.  Chen Meng handled her match convincingly, defeating Wang Manyu 4-1.  The final was the first upset of the tournament, with Chen Meng rallying to win the final three games to pull out a 4-2 victory.  Chen over Zhu 4-2 (-9, 7, -11, 11, 4, 5).
The Pan Am Cup, Europe Top 16 Cup, and ITTF Challenge Portugal Open are all on the event calendar for February.
Check in with ButterflyOnline.com for all the latest news and results.