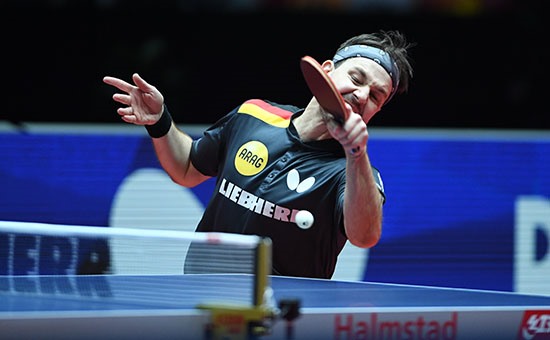 Why is Boll Strong? #5
(Courtesy of BUTTERFLY/TAKUREPO.com)

Q: Why is Boll strong?

A: Topspin Stroke from Both Wings After Topspin Loop

Timo Boll (GER) ascended to the World no. 1 spot in March 2018. Young players have distinguished themselves one after another recently. Table tennis has continuously experienced various rule changes but despite all the changes why does his strength not fade away in this age of intense rivalry, even at the age of 37? We will unravel his strengths with the help of his former teammate Seiya Kishikawa (JPN) with whom Timo Boll both practiced and faced in matches many times in the past. Also we asked Timo Boll for self-analysis.

This time we would like to cast a spotlight on the topspin attacking play from both wings after a topspin loop, the style that symbolises Boll.

“We can do nothing but block Boll’s topspin loop; then he can execute a series of attacks from both wings.”

“Boll had already been successful when I first went to Germany, I was in the 8th grade, he was extremely strong then. I watched him play with great admiration; he could topspin with both forehand and backhand equally from wherever in the court, close to the table and mid-distance.”

“Especially his topspin loop (the stroke imparted with heavy rotation on the ball) is so strong, something Japanese players seem unable to do. In addition, the ball travels quite low and short. It is difficult to counter attack; you need to respond with blocking play. It enables him to make series of relentless fierce attacks; you are at a disadvantage.”

“A chance will come if you can make a quality topspin loop.”

“I try to place the first ball on the table with accuracy and good quality but still safe. Then I normally get a good ball for the second attack. This ball is much easier to attack because there is no backspin; normally the opponent just blocks and it is much easier to attack strongly. The difference is quite big so it is even more difficult for the opponent to adjust the angle, speed and the rhythm.”

“Table tennis is a great deal about rhythm and if you change the rhythm and speed, you have a good chance to win the game.”

Boll’s Topspin Attacking Play from Both Wings After Topspin Loop 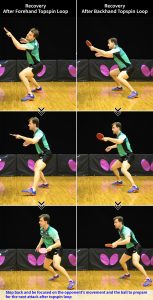 Step back and concentrate on the next ball after topspin loop

The topspin loop with fierce spin followed by a stable fast topspin; these two-topspin combinations cause variety in the amount of spin, speed and trajectory, which makes the opponent be one or two steps behind; that is Boll’s style.

Boll talks about the points to smoothly coordinate the topspin loop to the fast topspin:

“Step back and get ready for the next ball. This is the key for the second attack.”

As Boll points out, it is important to have a comfortable distance from the table after executing the topspin loop. By so doing, some merits will be gained; you can have space to swing your arm and enough time for preparation. It becomes easier to react to the next ball.

Be careful not to raise your upper body and also be aware to set the racket high and raise the waist when moving back from the table.

Swing with a flat arc when playing speed topspin

For the fast topspin after a topspin loop, prevent an error by moving the arm quickly whilst adding speed

The point we can learn from Boll to succeed in this manner is to move the arm in a more flat trajectory after preparing for the next stroke by stepping back to secure a certain distance from the table following a topspin loop. In this case, the ball can easily fly too long if you swing upwards like a topspin loop.

To prepare the racket high and swing in a more flat arc will make it less likely to make an error over the table; speed will also be increased.