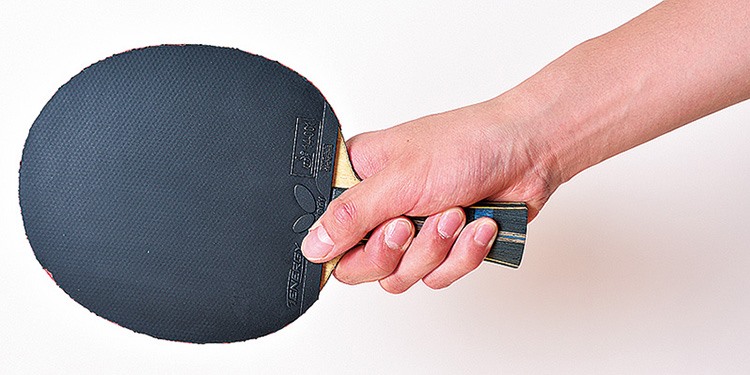 Roars of success, his trademark, respond throughout the hall.

Japan’s Tomokazu Harimoto responded vocally to every point won in Cape Town in 2016 to become the youngest ever World Junior champion. At that time he was only 13 years old; the young man has made a meteoric rise and has claimed the world’s attention.

Tomokazu’s techniques and power have increased dramatically in the past year. In December 2016, at the trials for national team places in the World Championships, he faced top Japanese players and marched through to the semi-finals, securing second place in the group stage. Now his talent is fully recognised, but not many people know the fact that he has fine-tuned his equipment along with his growth.

Let us check the subtle equipment changes that lie behind the breakthrough of the “prodigy”.

In primary school, Tomokazu won six consecutive titles at the Japan National Championships (Hope, Cub and Bambi categories). Also he won three consecutive titles in the cadet category (Under 13 and Under 14); it means he completed a clean sweep of the titles in his age group. However, he made a drastic equipment change after he achieved his fifth consecutive win at the nationals. In retrospect, that change may well have been the turning point.

Tomokazu concluded an agreement with BUTTERFLY just before moving to grade six; the contract included his younger sister Miwa. It was the very first such case for BUTTERFLY, it explains the potential of the Harimotos which BUTTERFLY foresaw.

The whole BUTTERFLY Research and Development team felt tense on the day in March 2015 when they proposed the equipment for the first time.

“His father Yu came here alone when we made a proposal about his equipment for the first time. He tried many blades and rubbers and selected those suitable for Tomokazu,” said Masamichi Kubo, the then manager of the team; now the current manager of marketing team. He was accompanied by Ma Jia, a player support division member and the person in charge of Harimotos.

Even after that, Yu sent detailed orders and requests on equipment to Ma Jia; especially after big tournaments, he requested various kinds of rubbers. It is his policy to make adjustments on a regular basis.

“I thought he would not select TENERGY series because it would be difficult to adjust such a big change from his accustomed rubbers, so we prepared BRYCE SPEED, ROUNDELL and to-be-released BRYCE HIGHSPEED for the trial. However, the first rubbers selected were TENERGY 64 and TENERGY 64 FX. He also brought back TENERGY 05; that was not used. I was surprised when Yu selected TENERGY rubbers because I thought he would most likely select something other than TENERGY series at that time,” explains Ma Jia.

“Tomokazu is only 13 years old nevertheless he is very strong. Yu selects the equipment for him and Tomokazu uses it to good effect. I have the impression that he can adjust not only techniques but also equipment thanks to Yu,” says Ma Jia.

Entrusted the task of supporting the Harimotos, Ma Jia proposed equipment according to their requests; regular contact with parents is maintained.