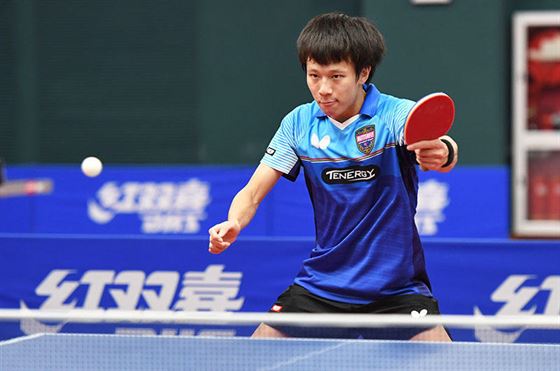 A Chinese up-and-coming southpaw Lin Gaoyuan, who is climbing up the world ranking ladder with his highly stable counter attacking plays close to the table.

This special programme will introduce Lin Gaoyuan’s techniques with some successive pictures taken at the training camp of the Chinese national team.

The third edition features his backhand topspin at mid-distance.

His backhand topspin at mid-distance is based on his compact racket movement in anticipation of long rallies ahead. It is not a power-based fierce attack; this is a good reference for a Japanese player whose physical size is similar to his.

Rotate the wrist to a maximum.

The first thing to note is the transition of his posture. Lin Gaoyuan creates a low body position by bending his knees and upper body (photo A-2); this enables him to generate power to move the playing arm strongly by putting his weight on both his feet.

Another fact to note is that he turns his waist slightly while pushing his left knee (the right knee for a right-handed player) forward after bending low (photo A-3). More power can be created by turning at the waist in unison with the racket arm; thus creating a low body position at the start of the stroke, enabling a high degree of momentum.

One important point for an effective backhand topspin stroke at mid-distance is how you can create the flight distance and power on the ball; good preparation is crucial. The backswing as a reference; Lin Gaoyuan thus turns his waist while bending low to create power.

One more fact that can be used as a reference is that he pushes his elbow forward and rotate his wrist to point the racket head diagonally backwards.

Point 2: Push from the legs to keep the body high before the actual movement begins. 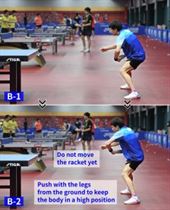 Push with the legs from the ground to keep the body in a high position.

Do not move the racket yet.

Note his movement to transit from backswing to the stroke (photos B-1 to B-2).

Lin Gaoyuan makes his body high before starting his racket movement; following the backswing, he is in a low posture because the position of his racket almost does not change; see photos B-1 and B-2.

The reason for his high body position is for the starting point of the stroke by pushing from the legs.

The high body position by pushing from the legs before moving arms makes it easier to efficiently transmit power to the arm from the lower body (the power generated by pushing from the ground by the legs). The precision of the stroke is enhanced as the movement of the arm becomes stronger and more stable if the racket movement begins after starting point.

Just like a long jumper dynamically jumps after a running start, not from standing still, the set-up position is essential for powerful strokes.

The point to note for his precise backhand topspin from mid-distance is the start position which enables him to keep his upper body high by pushing from the legs after preparing in a low position.

Point 3: Complete the stroke by moving the racket compactly

Move the racket upwards in a compact way

Finish the stroke by moving the racket downwards

Creating a start position to keep the body high by pushing from the legs (photo C-1), Lin Gaoyuan strokes his backhand topspin by moving the racket upwards while turning his waist back to the normal position after rotating a little in preparation (photos C-2 to C-3).

The racket movement appears compact, but as explained, Lin Gaoyuan can stroke a powerful backhand topspin with a good flight distance even with a comparably compact movement. The reason is because he prepares well before the stroke with a correct lower body and start position.

Also to note is the follow through (the racket movement after stroke). The racket goes downwards. Thus, the racket does not go far away from the body; that makes it possible to react to the next ball quickly if you finish the stroke by pushing the racket downwards.

Lin Gaoyuan, who is good in rallies close to the table, can stroke precise backhand top spins consecutively even in open rallies at mid-distance. The main reason is his follow through prioritising the preparation for the next ball made possible by the compact racket movement.