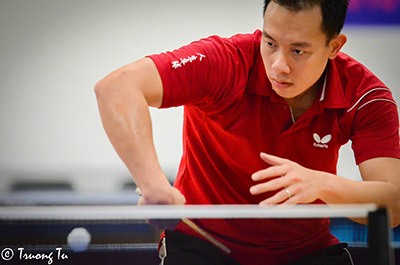 Practice to Master One Skill

(By Truong Tu)
People watch video of high level matches with many amazing rallies and think that they have to practice fancy drill combinations. We need to admit that unless we have already reached the National or International level, our rallies usually end within 5 shots or less. Therefore, mastery of the basic skills and shots should be the main goal for our practice.

It is better to thoroughly understand and execute one skill to the point where you master it; rather than knowing hundreds of skills vaguely.

For example: Try to practice your third-ball attack to the point that you almost never miss a weak return.  With a near perfect third-ball attack, your serve will suddenly seem stronger; not only because your third-ball skills will vary in spin and location, but also because as you win more and more points, your opponent will become more and more tentative. Your opponent will try to return your serve low and short which increase the possibility for mistakes.

Another example: Most pro-level players in critical point situations (like game or match point) will serve no-spin short because it is difficult to return a ball low and short with a no spin serve, and flipping a low serve is risky.  They have practiced this same serve and attack combination thousands if not millions of times so they most likely won’t miss the opportunity following up.

Don’t practice too many fancy drills, focus on mastering simple skills like the forehand loop off of underspin to both sides of the table, the backhand loop off of underspin from the center-left of the table, forehand and backhand flips, and the backhand banana flip. Those simple drills will give you a lot of confidence in the match enabling you to trust your shots even if you are down a point at the end of the 7th game in the Gold Medal round at the Olympics.

Below are some of the training tip videos:

How to Receive Short – With Richard Prause & The Butterfly Amicus Robot

How To Banana Flick – With Richard Prause & The Butterfly Amicus Robot

(By: Bowmar Sports Team) In this Butterfly Training Tips, Aditya Godhwani is focusing on Looping Half-Long Serve, then… Read More

ITTF Rankings: Fan on Top, Qiu and Lin-Ju Move Up

(by Steve Hopkins) Dang Qiu (World No. 10)is in the World Top 10 for the first time and… Read More
View All News