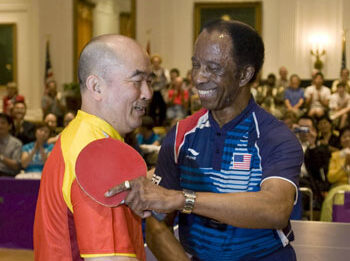 USA Table Tennis has lost a legend.  George Braithwaite excelled in Cricket and Track and Field before starting his career in Table Tennis.  In our sport, George was a part of the U.S. Team the launched Ping Pong Diplomacy from the World Championships in Japan. His list of table tennis accomplishments included being inducted into the Hall of Fame, being awarded the USATT Lifetime Achievement Award, and decades of competition, coaching and promotion of the sport he loved.

After immigrating from Guyana, George took a job at the United Nations as a statistics clerk, supporting the world’s most important diplomatic organization.  He soon discovered the UN Table Tennis Club where he began to play and practice.  Little did he realize that it was table tennis that would catapult him into the role of diplomat himself.  After touring China as a part of the original Ping Pong Diplomacy group, George took on a leadership role.  Over time, he has become known within the table tennis community by his nickname – Chief.

His Hall of Fame Profile can be found at the USATT site.   As noted on George’s own site (georgebraithwaite.com), he was a Ping Pong Diplomat and Champ Extraordinaire.

*This video was posted in 2019 by Westchester Table Tennis.  The Video is by Paramount Chief Production.  The direct link is here.

(By: Bowmar Sports Team) In this Butterfly Training Tips Coach Wang Hui is working on feeding multi-ball to… Read More

(By: Bowmar Sports) In this Butterfly Training Tips, Steve Moreno is using multi-ball to focus on the Forehand Loop… Read More

Coaching Tips of the Week: Don’t Be a Predictable Receiver

(By Larry Hodges) When you receive a serve, you really have three options. You can return the serve passively,… Read More

(by Steve Hopkins) Pleasanton Table Tennis Center is located at the center of Pleasanton, California to the East of… Read More

“I felt my development in the battle against Fan Zhendong.” (Uda) There are several turning points for athletes,… Read More
View All News