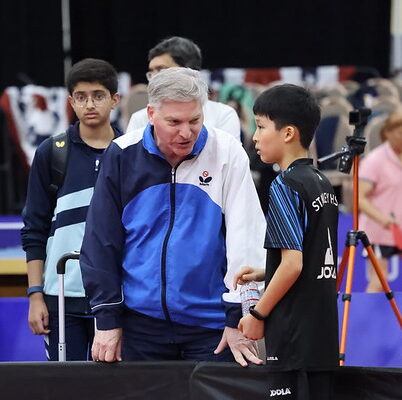 In practice, it often seems easy. There’s no pressure, no worries, just you hitting the ball over and over. It’s easy to get into a consistent rhythm. Then you play in a tournament, and while you are perhaps a little nervous, you don’t think it’ll affect you too much. Maybe you’ll hesitate 1%, but that means you’re 99% as good as in practice, right? Wrong.

You probably have had the experience where something you do consistently in practice fell apart in a tournament. It’s exasperating – you almost want to pull your opponent aside after the match and explain to him how much better you are then you were in that match. But what really happened?

Table tennis is a sport requiring hand-eye coordination. In practice, you develop your shots until you are almost a machine. But you probably don’t realize just how complex each of the tasks you are doing really is. Imagine, for example, blocking against a loop. In a split second, you have to 1) read the direction of the incoming ball; 2) read the depth of the incoming ball; 3) read the spin of the incoming ball; 4) move into position; 5) get the correct racket angle; 6) hit the ball in the center of the racket; and 7) execute a proper stroke with 8) proper contact. Guess what? If you hesitate even 1%, all of this comes crashing down, and what seemed easy in practice becomes a nightmare in tournaments.

How do you overcome this? It really comes down to two things. First, stop worrying about winning or losing, and focus on performance. This takes the pressure off individual points, allowing you to play more freely, and thereby increase your chances of actually winning. Second, if there’s a specific shot that you sometimes hesitate on, practice that shot extensively, both in practice drills and in matches against players where you often do that shot, so it becomes so second nature you don’t hesitate. Third, play lots of tournaments or similar “big” matches so you get used to playing under those pressure conditions. Because guess what – 0% hesitation = 99% making the shot!

(By: Bowmar Sports Team) In this Butterfly Training Tips, Tiffany Ke is focus on Serve & Attack with… Read More

(by Steve Hopkins, photo by USATT) The ITTF World Youth Championships is now underway in Tunisia and many… Read More

Coaching Tips of the Week: What Comes First, Speed or Consistency?

(By Larry Hodges) Top players play at super-fast speeds, and are seemingly able to loop kill or smash… Read More

(By: Bowmar Sports Team) In this Butterfly Training Tips with Jinxin Wang, where he is working on his… Read More
View All News