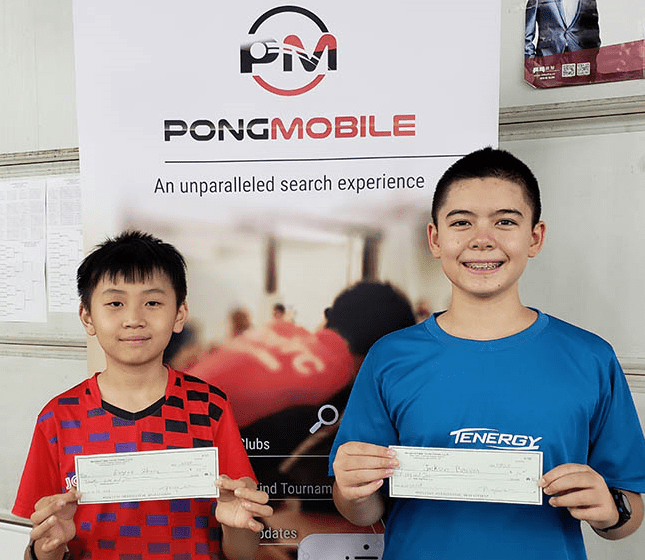 It was time for Alguetti confetti as the two 17-year-old fraternal twins, Sharon and Gal, met in the final of Open Singles. But it wasn’t always easy for the two as it was the strongest draw we’ve had since the 1990s, despite several locals who were out of town or busy coaching. Here were the top eight seeds:

A total of 82 players took part in the tournament, in eleven events. The tournament finished Sunday night, and was processed for ratings by USATT by 3:30PM on Monday! Here are the biggest gainers – the “100 Point Club”:

In the Open qualifying round robins, Gal was down 4-8 in the fifth against Xu Rui (2294), but with a series of attacks came back to win 11-9 and avoid a big upset. I’ve noticed in the past, both with myself and others, that often when a player struggles early on and has his back to the wall, but manages to overcome it and pull out a close match against a “weaker” player, he often goes to the opposite extreme – and that’s what happened!

After struggling with Xu, Gal went up against Jishan Liang (2650) in the quarterfinals. Jishan, who has won several MDTTC Opens (including our last one in April) and was rated over 2700 last year, was thought by many to be a lock to make the final, most likely against top-seeded Sharon, especially after seeing Gal struggle earlier. But there’s a reason they play it out, and Gal won 3-0, 12,8,9! Meanwhile, Sharon won against Lui Xue, 7,8,5. (Lui’s a former member of the Chinese Sechuan Province Women’s team, and was Chinese National Junior Girls’ Team Champion and Women’s Team Finalist.) Alas, Bruno Ventura Dos Ani, from Brazil but now a member of the Texas Wesleyan College Table Tennis Team, hurt his neck and had to default to Lidney Castro. The big battle in the quarterfinals was powerlooping penholder Bowen Chen vs. the third Alguetti brother, 18-year-old Adar, with Chen winning in a close battle, 10,-11,9,9, or else we’d have had a 75% Alguetti semifinals.

Next came the all-Alguetti “final.” The two brothers didn’t want to play, or at least not play a rated match. They asked if they could have one default to the other, but that they’d still play an unrated final for the small audience that was still there. I’m not a hardliner and understood why two brothers might not want to play, and so I reluctantly agreed. Did I make the right decision? I’m not sure; perhaps not. But they played an unofficial match, with Sharon winning 4-0, with Gal defaulting the actual final. Here’s the video (24:42 – Sharon has the dyed blond hair, Paul Kovac is umpiring). It might not have been “official,” but they played for real, no exhibition. (Whoever lost the “final” agreed to default.)

In Over 50 it was Thomas Sampson again, over Sun Xiao Jian, 8,7,8. In Under 15, it was 12-year-old Jackson Beaver over 11-year-old James Zhang, 8,5,6. James would then win Under 12 over Kay O’Hara. But to avoid confusion – this was a different James Zhang than the one who made the semifinals of Under 1000 and gained the most rating points in the tournament, 242. If only the two could meet in an all-James Zhang final!

As usual, a great thanks goes to sponsors Butterfly, PongMobile, and HW Global Foundation, the latter which runs the Talent Development program that trains at MDTTC – which swept all four finalists in the junior events. A great thanks also goes to Mossa Barandao of PongMobile, who helped run the tournament – he’s at the control desk the entire tournament doing much of the data input, plus taking pictures – see links below in results. (Mossa also sets up a station at our tournaments and leagues so players can easily look up via PongMobile, their ratings and ratings histories, both in numbers and graphic form. The station is always surrounded by players looking up all their friends, coaches, and rivals. Mossa and I argue continuously over whether PongMobile is pronounced like “automobile” – as I stubbornly do – or so it rhymes as if it were “Pong” followed by “Mobile” as he, the co-owner and founder, claims.) Jackson Beaver, who won Under 15 on Saturday, switched hats on Sunday and got about six hours of school SSL (Student Service Learning) as he helped run the control desk, mostly doing inputs. (He also coined the term “rating disability,” for a player who loses a lot of rating points.) And finally, a great thanks goes to referee Paul Kovac and umpire Stephen Yeh.

Here are complete results, care of Omnipong. Below is a summary.