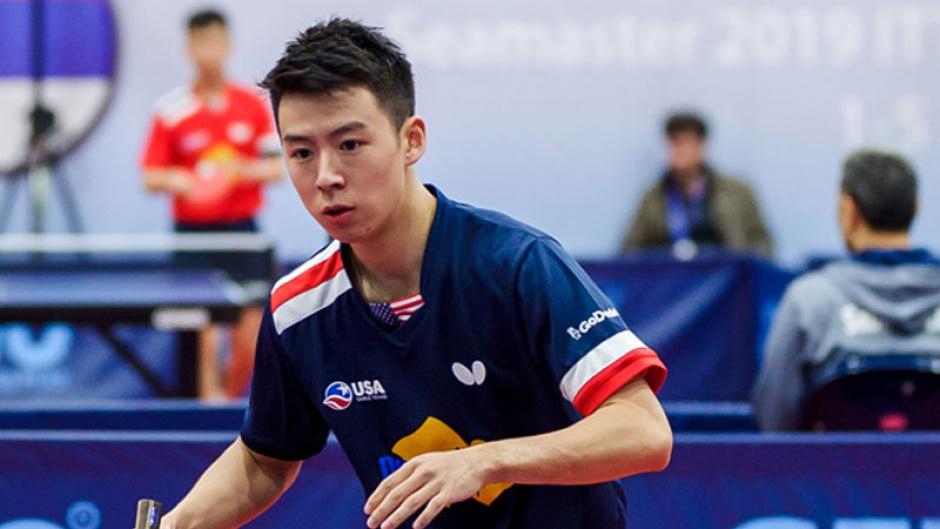 Every day, at 9am, Ye Tian arrives at the Swan Warrior Table Tennis Center and practices with his U.S. National coach Bob Chen. He also practices with his partners, Dan Liu and Jinxin Wang. With the COVID-19 Pandemic, there has been limited activities in the international table tennis world. “All I can do is to keep practicing, maintaining my physical condition and improving skills,” says Ye Tian, a table tennis player at the Swan Warrior TTC.

Born in China, Ye Tian started to play table tennis at age 8 and has continued for the last 14 years. “I love table tennis. I also enjoy the excitement of competition,” says the 22 year-old athlete. At age 10, Ye and his teammates won the National Team title at the National Junior Table Tennis Championships in China and as a result, he received a National First Level Athlete title.

At age 12, Ye joined the Bayi Table Tennis Team in China and became a professional player. Ye felt very lucky having the opportunity to learn from former World Champion Hao Wang while on the Bayi Team. Ye and his teammates won 5th place at the 2014 Chinese Table Tennis League Teams Championship, the highest level professional competition in China.

Ye first arrived in the U.S. in 2014 and competed in his first tournament. He lived in Boston for two years in 2016 and in 2018 he became a member of the Swan Warriors team. In 2015, Ye ranked No. 88 in the World for players under 18.  In 2016, Mr. Tian helped the New Jersey Table Tennis Club (NJTTC) win third place at the North America Team Championships (winning his match in the Quarterfinals). In 2017, Ye and his team at NJTTC finished first at the America’s Team Championship. In the 2017 U.S. Open in Las Vegas, Ye was a quarterfinalist of the Men’s Singles Event. During the event, Ye defeated Timothy Wang, a two-time Olympian and three-time US Champion. Ye was also a Semi-Finalist of the U2700 Event and a Semi-Finalist of Adult Open Teams at the U.S. Open that year. In addition, he has won multiple titles at the 2015 and 2016 U.S. Opens.

Ye is very thankful to his teammates, Dan Liu and Jinxin Wang for practicing with him in the past two years and feels that it has helped keep him in good shape. In 2018, Ye won second place in Mixed Doubles in the U.S. Open and a third place in U21. He also separately defeated Mingwei Ju and Kewei Li, who ranked top three among U.S. players, in Men’s
Singles at the 2018 and 2019 LA Open. In 2019, Ye attended the ITTF World Tour and defeated Ivonin Denis, the Russian player ranked number one in U21 Men’s World Ranking during the quarterfinals for Men’s Singles in Croatia and his ranking soared from the 220 to U21st.

Ye is a talented and passionate table tennis player, who has had impressive accomplishments at a young age and has received compliments from several world-renowned table tennis players/coaches. His former and current coaches describe him as a fast-break and all-around attacker, who demonstrates the various techniques and fully reflects the best features of Chinese-penholder – agile, fast, accurate, aggressive, and tactical. He has great rhythm control and outstanding ball handling in near table drop shot and flick/flip. His forehand services have strong rotation and covert that give his opponents great pressure. We look forward to seeing Ye reach new heights on the world’s table tennis stage.