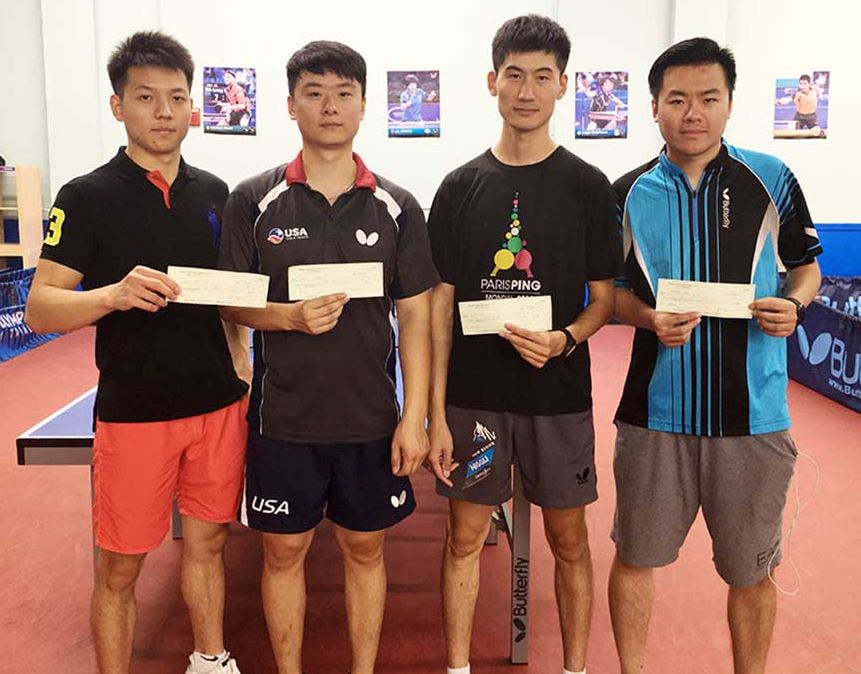 (By Larry Hodges-Tournament Director)
$2700 Butterfly MDTTC August Open
The MDTTC August Open was the day the choppers, juniors, and women & girls roared. There were choppers in the final and quarterfinals of the Open, and they won Under 2200 and Under 1500. There were juniors in the final of five of the six rating events (and – surprise! – both junior events). And women & girls won three of the six rating events. The ultimate winner was Stephanie Zhang, a chopping junior girl who won Under 1500!

Top-seeded Jishan Liang (2671) of New York, a powerful lefty two-winged looper, won the Open over second-seeded chopper/looper Jian Li (2660) of New Jersey, 2-1 win in this best of seven. Well, it was scheduled to be best of seven, but both players asked if they could play best of five, and we agreed. Then, after Liang went up 2-1 (with all three games being 11-5), Li was forced to retire due to an arm injury. The other chopper/looper in the mix was Wang Qingliang, who lost to Liang in the quarterfinals, 8,6,11. So $1000 to Jishan, $500 to Li, and $250 to the two semifinalists, Jeffrey Zeng and Chen Bo Wen, both MDTTC coaches, as is Wang.

Making his U.S. tournament debut was Czech Under 21 Men’s Team Member Jakub Nemecek, who by most estimates was about 2650. In the preliminaries he clearly showed that level – he might have the most powerful backhand loop in the country right now. But he might have suffered “first American tournament” jitters as he lost the first two games to Chen Bowen (2598) in the quarterfinals. He fought back valiantly before losing a close five-gamer, 5,8,-4,-9,8. Also making his American tournament debut was Martin Jezo of Slovakia, now a full-time coach at MDTTC. He was estimated at 2500, but alas, lost a close five-gamer to Khaleel Asgarali, who has been practicing with Nemecek and may be playing close to 2500 level himself.

A great thanks goes to sponsors Butterfly and HW Global Foundation, which sponsors the MDTTC Talent Development program. A great thanks also goes to Mossa Barandao of PongMobile. What is PongMobile? Mossa sets up a station at our tournaments and leagues so players can easily look up their ratings and ratings histories, both in numbers and graphic form. (The station is always surrounded by players looking up all their friends, coaches, and rivals.) It allows you to follow your favorite players, find clubs nearby or when traveling, and easily find tournament results. Thanks also goes to referee Paul Kovac and umpire Stephen Yeh. Also a thanks to John Hsu (one of our coaches), who not only took care of credit card payments (saving us time at the control desk), but also took charge of running the Under 12 RR. And above all, a great thanks to all 71 players who competed in the tournament!