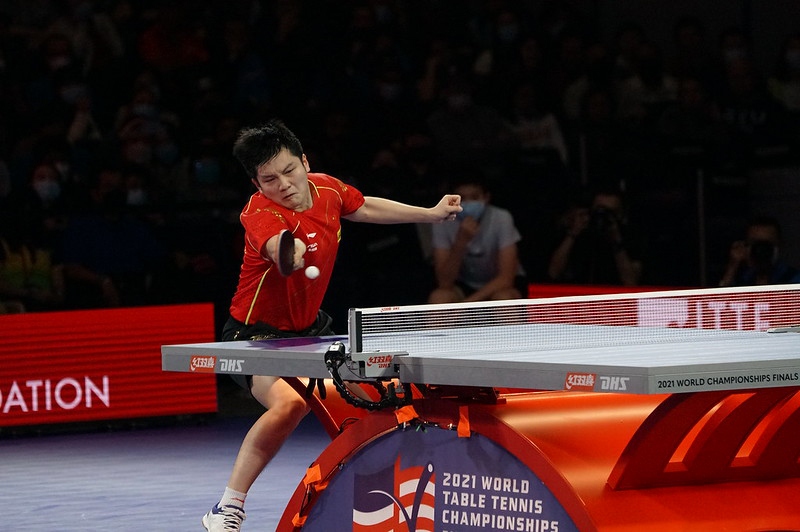 The World Table Tennis Championships  (livestream) has now progressed to the Semifinals in all five events.  There was a lot of great action today in the Quarterfinals.  Here is the Day 5 Update:

Kanak Jha’s great run ended today.  He played brilliantly throughout the tournament — perhaps the best tournament of his career — and he had some chances against Timo Boll today in the Quarterfinal. However, Boll controlled the match with careful play that at points was mistake-free and that was enough to keep the young American at bay.

Boll has been the beneficiary of both a great draw and some luck.  He was initially in the half of the draw with only one Chinese player (the other half had the four strongest Chinese players).  That didn’t insure an easy path as Harimoto, Sangsu Lee, and Zhou Qihao were in his half of the draw.  But boll defeated Qihao in the round of 64, and Harimoto and Lee both fell in upsets (as did Simon Gauzy and Ruwen Filus).  Boll’s Round of 16 was a walkover due to COVID protocols, so he is through to the Semifinals having only played three matches.  And to take this lucky draw one more step, Truls Moregard has emerged as Boll’s Semifinal opponent – Moregard has advanced from a bracket that initially included Lin Yun-Ju, Mattias Falck, Quadri Aruna, and Patrick Franziska.  Moregard is playing great, but he is no where near as experienced as many of those higher rated players.

The other Semifinal will be between Fan Zhendong and Liang Jingkun.  Fan has played two tough teammates in a row in Wang Chuqin and Lin Gaoyuan, and looks to make it three in a row when he faces Liang on Sunday.  Despite that difficult run, Fan has had a pretty easy time thus far, with a 4-2 match being his closest test.  Liang Jingkun’s path to the Semifinal has been a series of tough tests.  It took Liang all 7 games to defeat Germany’s Dang Qiu.  He then topped Benedikt Duda 4-1 in the next round and seemed to be back on track – but then also needed 7 games to defeat Liam Pitchford in the Round of 16.  This evening’s match was the toughest – as Hugo Calderano won the first three games, only to see Liang fight back to take 4 in a row and book his ticket to the Semifinals.

Five of the final 8 slots were Chinese players, and after a series of dominant performances, the Women’s Singles Semifinals will be an “all-China” affair.  Top seed Chen Meng topped Kasumi Ishikawa 4-0 to take the first spot.  She will face Wang Manyu (who topped lower ranked teammate Chen Xingtong 4-0).  Mima Ito could not find an answer for Wang Yidi, and Wang pulled away near the end of each game to secure a 4-1 victory.  Wang will face Sun Yingsha who topped Suh Hyowon 4-0.

American fans have been following Mixed Doubles very closely as we had two pairs of China/USA teams entered (in honor of the 50th Anniversary of Ping Pong Diplomacy).  The pair of Lin Gaoyuan and Lily Zhang topped second seeded Jia Nan Yuan and Emmanuel Lebesson 3-1 to reach the Semifinal.  They will face Japan’s Tomokazu Harimoto and Hina Hayata.  This win was historic in that it will be the first medal for an American in nearly 70 years.  Both Lin Gaoyuan and USA’s Lily Zhang are now guaranteed a Bronze Medal – and a win tomorrow would put them into the Final (and upgrade that medal to Silver or Gold).

In Men’s Doubles top seeded Lin Gaoyuan and Liang Jingkun defeated Dang Qiu and Benedikt Duda 3-2 in a tight Quarterfinal.  They will face the Swedish Team of Kristian Karlsson and Mattias Falck who pulled off their third consecutive upset win today – defeating China’s Wang Chuqin and Fan Zhendong 3-2.  The other Semifinal will be between Korea’s Jang Woojin and Lim Jonghoon as they face Japan’s Shunsuke Togami and Yukiya Uda.

Two Chinese teams reached the Semifinals of Women’s Doubles.  Wang Manyu and Sun Yingsha will face Sarah De Nutte and Xia Lian Ni in one Semifinal.  Qian Tianyi and Chen Meng will face Mima Ito and Hina Hayata in the other Semifinal.