US Open Finals Recap:  The Japanese and Lily Too
Shop Butterfly 2022 Catalog 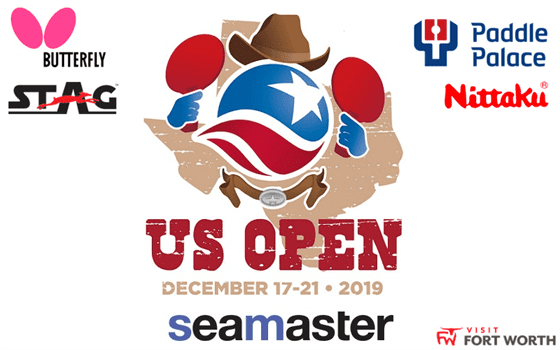 US Open Finals Recap: The Japanese and Lily Too

US Open Finals Recap:  The Japanese and Lily Too

The 2019 Seamaster US Open is drawing to a close in Fort Worth, Texas.  The tournament featured 88 events with both singles and doubles, junior and senior events, and age events starting with Minicadet going all the way up to Men’s Over 80.

The Men’s Singles event featured a very strong draw with players exceeding 2600 in both halves of the draw.  The final four players in the bottom half of the draw were Enzo Angles and Zhou Xin (the tournament’s third and fourth seeds) and Kentaro Miuchi and Liu Yi.  Japan’s defensive specialist, Miuchi upset Enzo to advance to one Semifinal.  Chinese chopper Liu Yi lost the first game against Zhou Xin but then won four games in a row to advance.  In the Semifinal, Miuchi won the first three games in the battle of choppers, but was then seemingly worn down by Liu.  But Miuchi found a new gear in the seventh game to seal the victory with an 11-4 final-game win.

In the top half of the draw, the tournament’s top seed was upset in the Round of 16 by Japan’s Hiromitsu Kasahara.  Kasahara was joined in the Quarterfinal by Daniel Gorak.  ICC coach Bob Chen reached the Quarterfinal with a 4-2 win over Kai Zhang.  The fourth Quarterfinalist was Japan’s Tomoya Fujimura.  Gorak dominated Hiromitsu 4-0.  Fujimura outlasted Bob Chen 4-2.  And in the Semifinal, it was Fujimura who dominated from the start winning four straight.  In the Final, it was all Miuchi as he jumped out early in each game and cruised to a 4-0 victory over what appeared to be an outmatched (or perhaps very tired) Fujimura.

In the Women’s Singles Event, it was USA’s Lily Zhang seeded first and she cruised through the top half of the draw winning 4-0, 4-0, 4-2, 4-1 on her way to the Final.  America’s other highly ranked player, Jennifer Wu lost in the round of 16 to Wang Chen.  Wang Chen then lost to Japan’s Mayuka Taira in the Quarterfinals.  It was Mayuka who emerged to the Finals after securing her place with a 4-2 win over Juan Liu.

In the Mayuka Taira / Lily Zhang Final, it was Zhang that had an early lead.  But five points in a row put Taira ahead.  Zhang lost some of her power late – guiding the ball and taking a passive position.  The first game went to Taira.  The second game was dominated from the start by Zhang as she built an early lead and then sealed the victory with strong attacks.  The third game looked very much like the first – with Zhang ahead early, but then Taira fought back and was up 10-8.  But Zhang won four points in a row to win 12-10.  In the fourth game, Zhang led from start to finish, building a small lead and then trading points.  And in the final game, Zhang jumped ahead early and in front of the very supportive crowd continued to build her lead all the way to an 11-5 victory.  Lily Zhang over Mayuka Taira 4-1 (-8, 3, 10, 6, 5).  For Zhang, this is the perfect finish to a very successful 2019.  Zhang has risen to a career high No. 26 in the World Rankings in a year that has included a win at the Pan American Games and solid results on the ITTF Tour.

In Men’s Doubles it was an all-Japanese final as Matsushita/Eto took on Kasahara/Fujimura.  The same was true in Women’s Doubles with the Japanese team of Sato/Seike matched up against Nagao/Odono. And for a clean sweep, it was also two Japanese teams in the Mixed Doubles Final with Fujimura/Taira defeating Kasahara/Nagao.

For the elite events at this US Open, it was Japanese players at the top of nearly category.  However, the story that will be remembered this year is Lily Zhang’s dominant performance in Women’s Singles.  At the end of this night in Fort Worth, it was one of America’s favorite team members holding the US Open trophy.