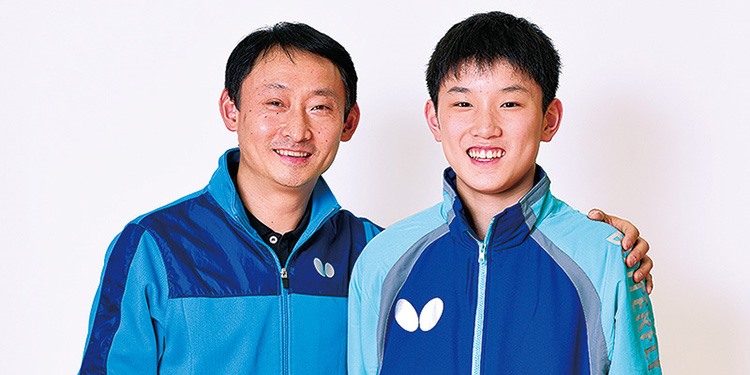 Reasoned equipment choice:
Transition of equipment is a sign of his development

Selecting equipment, rackets cannot be ignored, just the same as rubbers. Yu says “The concept is the same for both rackets and rubbers. I want him to have an easy-to-use racket because he is just a child. I think a stable racket is essential, just as rubbers. Tomokazu cannot control the ball well with a racket that has a hard feeling with woven materials in the second layer. I want to place importance on control even if his techniques improve and his power increases in the future.”

The first racket Yu selected for Tomokazu was the FUKUHARA AI PRO ZLF. After that he has been using a custom-made racket based on INNERFORCE LAYER ALC with a degree of improved reaction. For Tomokazu, who makes the opponent move around the court with blocking and counter attacking close to the table play, he does not require the ball to travel a great distance with a hard racket.

“With a racket with a hard feeling, the ball bounces before any spin is imparted and goes downwards. Now the racket with the sense of holding the ball is easy for me to use,” Tomokazu places confidence on the current racket which is easy to impart spin on the ball. 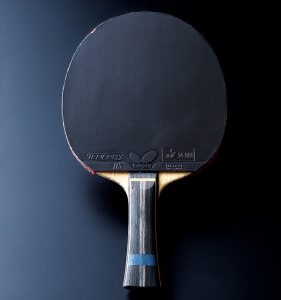 Masamichi Kubo, who has taken care of his equipment selection, says, “I think it is a very reasonable equipment selection that he made. He selected a racket with less reaction but with controllability first and increased the reaction gradually. For rubbers, he has selected quite appropriately both then and now, taking his swing speed into consideration. He started using TENERGY 05 earlier than our expectations, but now he can use it well. Yu is always very serious about everything. When he came all the way to the BUTTERFLY TEC in Tokorozawa, Saitama prefecture from Sendai, Miyagi prefecture for trials, he went back to Sendai for practice in the evening. He is really stoic and has a high sense of professionalism. He is a professional among professionals. He aims high, so we respectfully treat his requests with trepidation.”

For BUTTERFLY, who supports Tomokazu, his requirement becomes more and more refined as he becomes stronger. It is not easy to keep meeting his requests. Ma Jia, the person in charge says, “His parents do not want to fail him in any single matter. His mother Ling gives mental guidance. There are many coaches for techniques but there is no one other than his parents who can understand the subtle change in his mental state and give him advice. Of course, there are some points only he can be aware but they have the attitude to try their best within any possible limitations. They sometimes ask us for some advice on matters other than table tennis; we will keep supporting them most empathetically.”

Many people expect future successes of Tomokazu; there is no doubt that he will play a major role in Japanese table tennis in the future. Therefore, he will continue selecting optimal equipment for himself. The equipment transition is the very testimony of his further advancement.