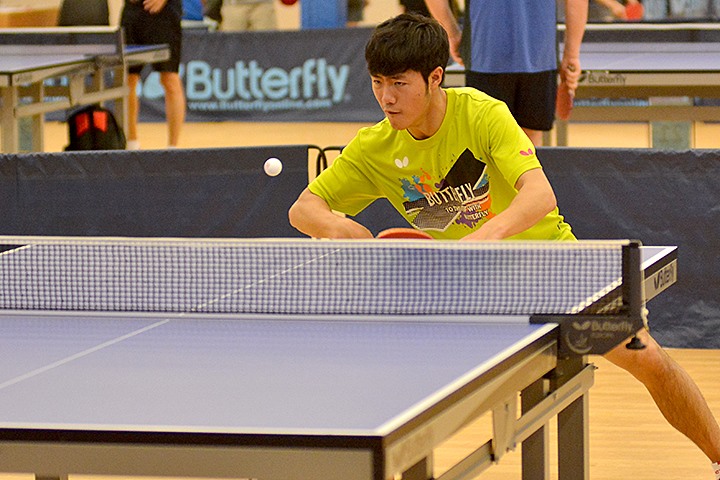 Exciting play, upsets and a little bit of drama framed the third and main day of competition at the 2017 Butterfly Cary Cup, but the top 4 seeds in Division A accentuated their dominance and did not drop a match throughout the entire day. For the main giant round robin event, competitors in all divisions battled to advance from their 8 person round robins into the single elimination rounds. In the hotly contested Division A, the top 4 from each of the 4 round robin groups moved on to the championship single elimination round, with the winner looking to take ~$5,000 in cash and prizes. In Divisions B, C and D the top 2 from each round robin group advanced into the quarterfinals for their respective divisions.

Kaden Xu (2700), Jinxin Wang (2691), Jian Li (2690) and Ruichao Chen (2690) held fast to their top 4 seeding and all qualified first in their round robin group in Division A, putting them in good position in their single elimination draws. Jian Li had a close call with Kai Zhang (2663) in the round robin event; down 0-2 and 8-10, Jian defended his way back into the match and won 3-2. Although many upsets occurred within the round robin groups, the remaining 12 advancers into the top 16 final elimination draw were to be expected with a few surprises. In Group 1 of Division A, Stephen Chu (2191) held onto a 4-3 match record to advance. Notably missing from the qualifiers from Group 4 of Division 1 was 5th seeded Jishan Liang who finished 5th in his group. Due to an arm injury and a default, Jishan lost a head to head tie based on round robin points (e.g. 2 points for win, 1 point for loss, 0 points for default) causing him to finish 5th even though he had a better win/loss record (5-2 vs. 4-3 for the others in the tie). In his place, Jiangshan Guo (2275) will advance as the only female player in the top 16.

Single elimination rounds for Division A begin at 11:00 a.m. ET on Sunday, April 2nd and will be live streamed via Butterfly North American and USA Table Tennis’s websites. Exciting matches and more than a few upsets are to be expected given the competitiveness of the draw.

Continual coverage of the 2017 Butterfly Cary Cup and stories about the athletes will be available at ButterflyOnline.com, or via Butterfly North America’s Twitter and Facebook pages.