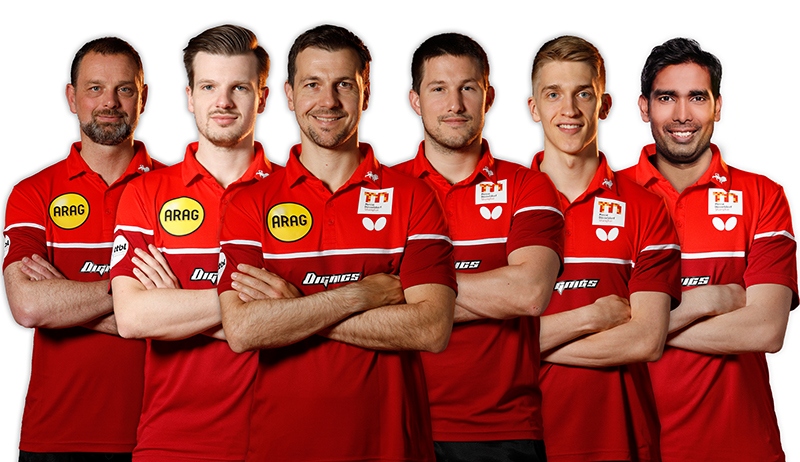 The final week of the Tischtennis Bundesliga is underway with the most teams entering Friday with 2 or 3 matches remaining.  Borussia Dusseldorf secured the top playoff position on Friday with a 3-0 win over TTC Zugbrucke Grenzau.  Ochsenhausen’s 3-0 win against TTC Neu-Ulm guaranteed a playoff spot for the squad, and while other weekend matches could still determine overall positions 2, 3, and 4, with Ochsenhausen currently tied for second but in the third position due to he head to head tie breaker.

The team tied with Ochsenhausen and likely to enter the tournament as the second seed is FC Saarbrucken with Patrick Franziska, Shang Kun, and Dark Jorgic.  How the teams match up is interesting as when you look at the top 12 players by wins this season, Ochsenhausen has first and fifth (Gauzy and Calderano) but no one else in the Top 12.  Dusseldorf has second, eighth, and twelfth and Saarbrucken has sixth, seventh, and tenth.  Those scores can be a little misleading, as the top players generally play only other top players, so it is often the team’s second best that scores the most points (as they take easy wins against the weaker teams that don’t have depth).

The final position may be decided on Sunday, as all three teams tied for fourth place each have a match scheduled.  ASV (led by Dang Qiu and Wang Xi), Konigshofen (with Bastien Steger), and Muhlhausen (with a deep star-less team of Mengel, Ionescu, and Habesohn) are all still in position to move up.  Only the final four teams will have a place in the playoffs – and whoever qualifies in the fourth position will be slated to battle top-seeded Dusseldorf in a few weeks.

Check in at Butterflyonline.com for all the latest news and results.